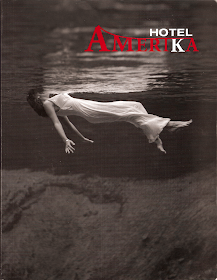 One sentence essay reviews:
*Bernadette Esposito "If You Had Wings: A Biography in Plane Crashes"- My favorite in the issue, reminds me of Eula Biss' The Ballonists for its mix of tragedy and parents' divorce.
*Marilyn Abildskov "The Summer of Barbecues" - short memoir piece on a breakup, nothing we haven't seen before.
*Marcia Aldrich "Sidestroke: The Mother Essay, 2.0" - Unfortunate title, terrific essay.
*Barrie Jean Borich "Alabaster City's Gleam [A body map of Chicago, with insets]- Reads like a love story to Chicago, mixed in with Borich's own love story, rockin' essay.
*Kathryn Winograd "Guns, Knives, and the Amazon Warrior Princess"- What's with the titles of these essays? Clearly an excerpt from a larger work, would probably work better in that form.
*Tony Whedon "Looking For The Three-Toed Woodpecker"
*Xu Xi- B.G. The Significant Years "B.G.=Before Google, probably relies too much on the structure, especially since it doesn't add much to the essay.
dleg at 7:08 AM
Share