Our Essay Daily Salon Series hosts intimate and lively conversations with writers we love, pitched at readers and practitioners of the essay and more generally creative nonfiction. 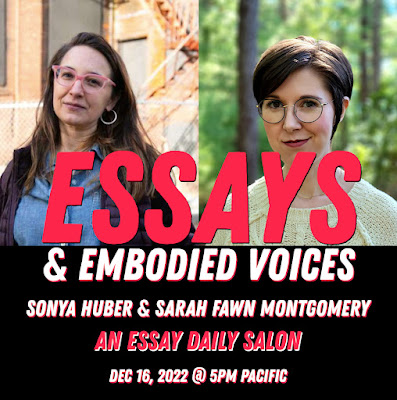 Essay Daily is proud to present the next entry in our salon series, "Essays & Embodied Voices", a conversation with Sarah Fawn Montgomery and Sonya Huber about voice in essays & how body informs craft. We'd love for you to join us over Zoom on December 16th, 5pm Pacific Time. Leave your email in the form above and we'll send you a link on the day of the salon.

Sarah Fawn Montgomery's latest collection, Halfway from Home was published with Split/Lip Press this November. Essays from this lyric essay collection on nostalgia, climate change, and searching for home during emotional and environmental collapse have appeared in Bellingham Review, Crab Orchard Review, Fourth Genre, New England Review, Southeast Review, Sycamore Review, and Zone 3. Several have been listed as Notable in Best American Essays. Dinty Moore calls this collection “intensely intimate” and Kwame Dawes says it is “a work of urgency, sensibility, and immediacy.” Sarah Fawn is also the author of Quite Mad: An American Pharma Memoir (The Ohio State University Press), as well as three poetry collections. She is currently an Assistant Professor of creative writing at Bridgewater State University

Sonya Huber’s latest book is the nonfiction craft text Voice First, published with the University of Nebraska Press in September. This text weaves together in-depth discussions of various concepts of voice and stories from the author’s writing life, offering a personal view of struggles with voice as influenced and shaped by gender, place of origin, privilege, race, ethnicity, and other factors, reframing and updating the conversation for the twenty-first century. Sonya Huber is also the author of seven other books, including Supremely Tiny Acts: A Memoir of a Day (Ohio State University Press, 2021) and Pain Woman Takes Your Keys and Other Essays from a Nervous System (Nebraska, 2017). She is a professor of English at Fairfield University in Connecticut.

Jana Larson holds an MFA in Creative Nonfiction Writing from Hamline University, where she studied with Barrie Jean Borich (My Lesbian Husband), Patricia Weaver Francisco (Telling: A Memoir of Rape and Recovery), and Jim Moore (Lightning at Dinner); an MFA in Filmmaking from the University of California, San Diego; and a BA in Anthropology from the University of California, Santa Cruz. As a filmmaker, she has received awards from the Princess Grace Foundation and the Minnesota State Arts Board and shown her work at festivals and the Walker Art Center. She lives in Minneapolis, Minnesota.

Justin St. Germain is the author of the book-length essay Truman Capote’s In Cold Blood, part of IG Publishing's Bookmarked series. His first book, the memoir Son of a Gun, won the Barnes & Noble Discover Award, was a New York Times Book Review Editors’ Choice, and was named to many best books of 2013 lists.

St. Germain’s writing has appeared in The New York Times, The Guardian, Tin House, New England Review, DIAGRAM, and many other publications, as well as anthologies including Best of the West and The Pushcart Prize. He was a Wallace Stegner Fellow and Marsh McCall Lecturer at Stanford University, and received his BA and MFA from the University of Arizona. He lives in Oregon, teaches at Oregon State University and the Rainier Writers Workshop, and co-hosts I'll Find Myself When I'm Dead, a podcast about the literary essay.

May 17, 5pm Pacific/8 Eastern: What's Genre Got to Do with It? A Salon on Hybrid Work featuring Megan Culhane Galbraith and Kristine Langley Mahler

Megan Culhane Galbraith is a writer, visual artist, and an adoptee. She is the author of The Guild of the Infant Saviour: An Adopted Child’s Memory Book, a hybrid memoir-in-essays published by Mad Creek Books on May 21, 2021. Her work was Notable in Best American Essays 2017 and her writing and art have been published in Tupelo Quarterly, Hobart, Longreads, Hotel Amerika, Catapult, and Redivider, among others. She is the Associate Director of the Bennington Writing Seminars and the founding director of the Governor’s Institutes of Vermont Young Writers Institute. www.megangalbraith.com

Kristine Langley Mahler is a memoirist experimenting with the truth on the suburban prairie outside Omaha, Nebraska. Author of Curing Season (WVU Press, 2022) and recipient of a 2021 Individual Artist Fellowship from the Nebraska Arts Council, Kristine's work was named Notable in Best American Essays 2019 and is published in DIAGRAM, Ninth Letter, Brevity, Speculative Nonfiction, and The Rumpus, among others. She is the director and publisher at Split/Lip Press. Find more about her projects at kristinelangleymahler.com or @suburbanprairie.

On March 1, 2021, Matthew Gavin Frank and Nicole Walker talked about Processing Disaster
Matthew Gavin Frank is the author of the nonfiction books The Mad Feast: An Ecstatic Tour Through America’s Food, Preparing the Ghost: An Essay Concerning the Giant Squid and Its First Photographer, Pot Farm, and Barolo; the poetry books The Morrow Plots, Warranty in Zulu, and Sagittarius Agitprop; and 2 chapbooks. His new nonfiction book, Flight of the Diamond Smugglers (about, among other things, the ways in which carrier pigeons are used by diamond smuggling rings) came out this February 2021 from W.W. Norton: Liveright.
Nicole Walker is the author of the books The After-Normal: Brief, Alphabetical Essays on a Changing Planet, Sustainability: A Love Story, Where the Tiny Things Are, Egg, Micrograms, and Quench Your Thirst with Salt. [facebook] [twitter]
*
On 11.30.20 From Essay to Book featured Kati Standefer and Kelly Sundberg. We talked with both writers about how they got from publishing an essay and getting some attention from agents to selling and publishing a book.
*
On 10.30.20, The Polymorphous Essay featured Bethany Maile, author of Anything Will Be Easy After This and Sarah Minor, author of Bright Archive, in conversation with Ander Monson.
*

On 8.21.20, Talking Back to Books featured Kim Adrian, author of The Twenty-Seventh Letter of the Alphabet: a Memoir, Sock (Object Lessons series), and Dear Knausgaard, and editor of Shell Game: Writers Play with Borrowed Forms and Stephanie Reents, author of I Meant to Kill Ye and The Kissing List.

We published this expanded transcript of our conversation here if you missed it.