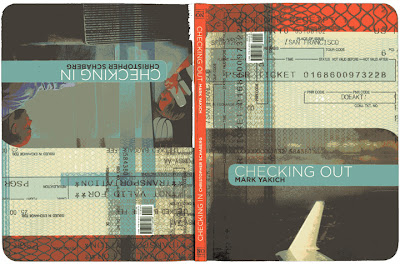 I've always been interested in airports more as liminal spaces, barely spaces at all (my first chapbook, Safety Features, was set all in airports or on airplanes), and I love to write in them. They're transitional, public but anonymous, at least for the passengers, though they do have a dearth of outlets (as, among others, Patrick Smith, who writes a column for Slate called Ask the Pilot, has noted on multiple occasions). These transitional, liminal spaces are ideal for the kind of essay thinking that de Botton does, and that Schaberg and Yakich do in this book. I'd love to have seen more of their brains on display here, see them each sprawl out a bit more (Yakich sprawls more successfully than Schaberg to my mind, though his domain is more relentlessly personal). Perhaps to suit that direction they've started a website (journal? I guess) called Airplane Reading which I'd encourage you to check out and send work to: it too is a home for some essaying (or perhaps memoiring or storying). Try flipping back and forth between each of their halves of the book and the website, and then insert some Lia Purpura for an ideal cross-training regimen. And take down your holiday decorations before you're an embarrassment to your neighbors, please. Okay, I'll give you until New Year's Day, or the 2nd if you're hungover on the 1st. I can hear the tinkling of the music still emanating from your yard.
Posted by Ander at 4:34 PM No comments: