Allow me to interject in our discussion

a brief note about an interesting essay that arrived at random in the mail last week (thanks to you, unknown person who sent this; it's pretty great to get a package as cool as this one without notice), M. Kasper's OPEN-BOOK, not nominated for the Essay Prize, like other texts under discussion here in recent days: 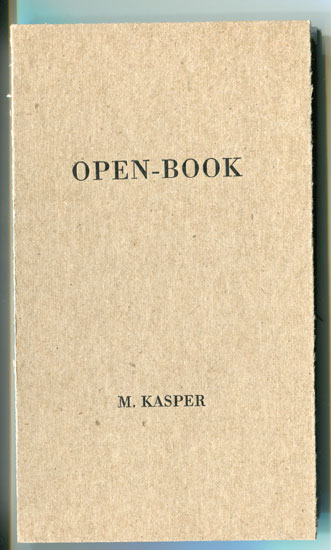 It's a lovely package, the book itself, an accordion-fold essay made up of eleven five-line, all caps strophes of essay slash possibly poem or crypto-prose, printed on spreads of digitally manipulated backgrounds that are meant to suggest "MARBLE FACING ON WALLS OF WEALTHY CHURCHES...CALLED 'REVETMENT' / TWO SLABS...SOMETIMES MOUNTED LIKE PAGES IN AN OPEN BOOK". The structural conceit is pretty straightforward but is no less lovely for its transparency: 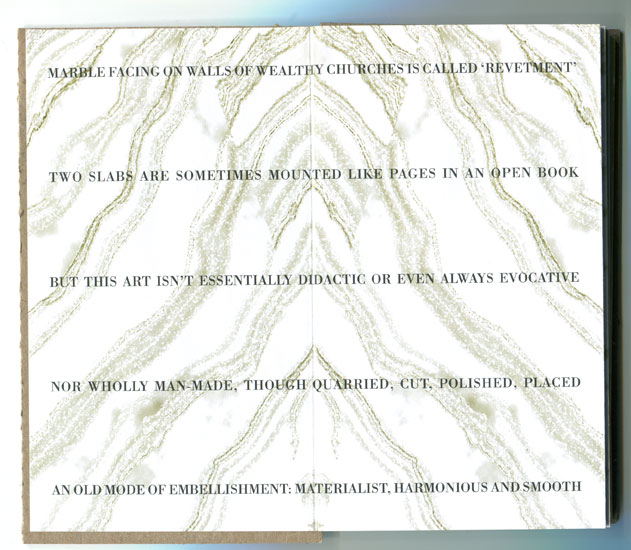 . The book as physical, manipulable object--and the spread as unit of meaning--creates a great deal of what's interesting about this particular reading experience. Don't get me wrong: the prose is right on too, even though there's not a lot of it. What prose there is reads aphoristically, and spreads can mostly be read fruitfully individually, though they're clearly meant to add up to a larger whole. One spread reads: "NOW INSTEAD WE ADMIRE ITS DIALECTIC OF GRAPHIC DAZZLE AND COOL / SERENITY (ON A HOT MEDITERRANEAN DAY ESPECIALLY, ITS META- / MORPHIC MAKE-UP, ITS DISCOVERY, ITS MINIMALISM ("A PRODUCT OF / CHANCE WITH A SMALL DEGREE OF DESIGN" (ALEXANDER COZENS), ITS / LONG, VARIED, MODEST LIFE AS AN EPITOME OF ABSTRACT EXPRESSION," buttressing its ideas with some nice linguistic licks. I'm actually not sure if these lines are prose or poetry or something else (I suppose the hyphenation suggests the prose, but you never know, meta- being one of those words that, isolated, seems to suggest its own reading), but I can say that it is a lovely little reading experience, this one essay, floating up history and philosophy and some serious thinking, all in pursuit of its subject, which is partly the act of reading, that same dirty act that I'm (and now you're, I becoming accomplice) involved in here. One section explains that "OPEN-BOOK REVETMENT DEVELOPED IN THE SAME EPOCH AS THE CODEX / DO THEY BOTH INVITE VIEWERS TO READ? TO READ IN? LATE CLASSICAL / COMMENTATORS ADMIRED HOW RANDOM FORMATIONS IN THE STONE / SUGGESTED REPRESENTATIONAL IMAGES," and it's true that the images behind the text lend themselves to interpretation. Which after all is a space opening up in the reader as we do our thing, right? 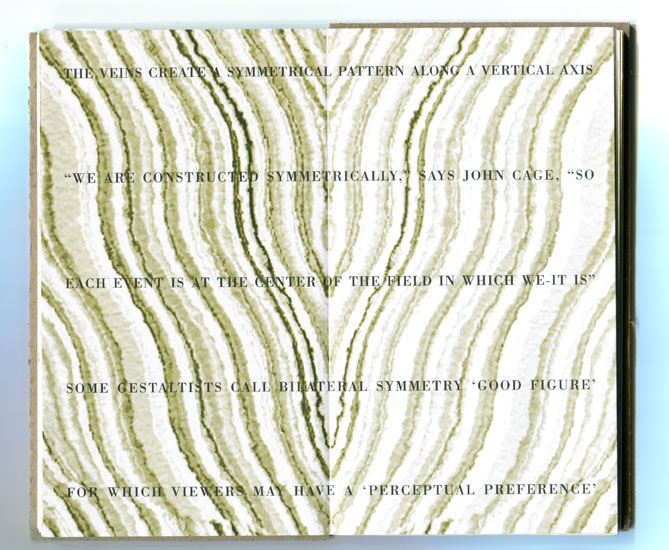 I've been thinking a lot lately about the future of the book, if the book has a future (hint: of course it does; see also here if you're interested) and how so much of the hand-wringing about the future of the book is tied up with books that as physical objects don't do a whole lot right now to justify their physical form, the pulp and ink and glue they're made with. They might as well be e-books, I think, or apps, or whatever cloud-based awesome is coming next, because they're hardly books at all. They're text that could be reflowed fruitfully in most any container. So why complain about the end of those books, I wonder? This book, however, is one that couldn't be presented in any other way, really, since the physical act of accordioning the book open is so inherently pleasurable and involved with the meaning of reading, and the text so well tailored to the layout and design and production of the object.
This also strikes me as a hallmark of a successful essay, that its form is the one best suited to its content, and in fact that they're inseparable, like me and pigs-in-blankets, the fs in bff. Which is all as it should be. Stay sweet, M. Kasper. Remember the old technology of the year book, Ugly Duckling Presse? Have a good summer! See you in the fall!
Posted by Ander at 11:43 PM