On What Maps Might Do: A Conversation From The Editors of Territory

Nick Greer: How do you feel about maps? I ask this question often. I ask it of friends, acquaintances, and strangers; artists and non-artists; old and young. It’s not an especially hardball question, but it’s one that’s intrigued me (and my co-editor Tommy) for a while now. Intriguing, in part because I wonder why I myself am so attracted to maps, but more because the answers to this question are surprising.

The responses are surprising, but not because people have especially personal or well-considered thoughts or feelings about maps. It’s the opposite. Most people say sure, they like maps, or that they love maps, how did I know? Nobody dislikes maps, but when I press for specifics or an explanation, the responses I get aren’t exactly illuminating. The most common response is to shrug, but rarely is this to communicate nonchalance. Unable to give a good explanation, people ask me what others think, what I think, what they should think. Some divert the conversation or get defensive. Others backtrack and apologize. Some simply stare at their shoes.

In other words, people tend to behave the way we do when we’re lost, when we need a map. Territory is an attempt at making that map.

Thomas Mira y Lopez: In the course of reading up on maps before we launched Territory earlier this year, I came across this legend. It doesn’t necessarily articulate how I feel about maps (I’d most likely be staring at my shoes), but it does get at what I feel maps might do:

In 1824, the Scottish explorer Hugh Clapperton visited the court of Mohammed Bello, the sultan of Sokoto and the most powerful man in western Sudan. Clapperton wanted to trace the course of the Quarra, also known as the Niger, the third longest in Africa.

European geographers had been seeking this course for centuries. The Quarra runs inland from the Guinea highlands, extending north and east over a breadth of 2,500 miles until it bends sharply—and unexpectedly—at Timbuktu and empties into the Gulf of Guinea. Rumor had it, however, that the river ran straight east until it joined the Nile. If this were the case, the Quarra would prove an invaluable tool. Colonial armies could travel inland without the prospect of becoming lost in the desert. They’d also possess a trade route to transport men and goods from the Gold Coast to the Mediterranean. In short, a great many lives depended on the knowledge of the Quarra’s path.

When Clapperton arrived in Sokoto, Sultan Bello drew the river’s course in the sand: its path north and east and then its sudden drop into Guinea’s gulf. Clapperton was thrilled and asked Sultan Bello’s permission to navigate the route. But the Sultan surprised the explorer and refused. Clapperton was unable to set off without the Sultan’s goods and men and so he remained at Sokoto, hoping in vain for a change in mind.

Clapperton was ill and a year later he would return north to Tripoli and die from yellow fever. Before he left, the Sultan provided him with a map of the Quarra’s route. But this map, Clapperton noticed, looked completely different than the line first drawn in the sand. The Quarra was once again the river of European legend. The Sultan had drawn a bold black line on the map—in reproductions of the map (only available in lo-res online, perhaps fitting given the map's history), it looks a bit like a stray hair left on a photocopy—curving down and around Sokoto and the other cities of his kingdom. Nowhere did he show its origin or its emptying out into the sea. Along the line, the Sultan wrote that this was the river “which reaches Egypt and which is called the Nile.” 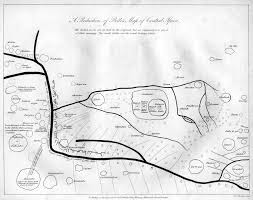 In other words, the Sultan drew a lie. And Clapperton believed the lie, or at least he accepted it, bringing the false map back to Tripoli to live on as an artifact of his daring yet never traveled adventure.

NTG: Lying is central to maps, both to its construction and its appeal. The atlas I grew up with, my mom’s own childhood atlas, was published in the early 70s, and I remember loving its anachronisms: Rhodesia, South Vietnam, the USSR. Maps that still include these countries are “wrong,” but this wrongness is charming in a way. You can decide to right the wrong by buying a new atlas, altering the old one, or simply making a mental note. Or you could leave it as is, a wrong. When I was a kid, reading my mom’s atlas, I often chose this lattermost path, choosing my own adventure, so to speak, seeing these countries as mythical and mystical, the stuff of legend. I imagined myself there, a spy or journalist among elephant poachers and puppet rulers, an exciting alternate reality to my safe suburban one.

Our fondness of maps is so often childlike--friendly and natural; curious but uninspected and unaware--and many of us have pleasant memories from childhood. Of leafing through an atlas or spinning a globe, using these maps as prompts for play and imagination. Here is where you were born. Here is where you will get married. Here is where you’ll die. And, if you don’t like what you got the first time around, you could give the globe another spin--right the wrong. I played my own versions of these games, sometimes losing entire afternoons to “reading” my mom’s atlas. I obviously loved it, but had you asked me, How do you feel about maps?, I couldn’t have offered any specifics, just that I did.

Nobody did ask me that question, not so directly at least. I encountered this and other questions over many years and in many forms. A short story about pogroms and labor camps. Movies about child soldiers, heroin smuggling. Photographs of napalm eating through skin. A childlike joy is something that can’t really be accounted for, so it’s no surprise that once you make someone account for it, it goes from childlike to childish, selfish even. Thinking back on how easy, how enjoyable it’d been to make places and their people the objects of my fantasy, I grow embarrassed. In my excitement, I had let the map become the territory, but, when made to see the territory through another map--an other’s--I realized the crassness of my own.

When you read the Clapperton story, whose sympathies and motivations are consciously gray, how did you read the Sultan? Is he naive, believing the Quarra to lie just as the legend describes, or clever, knowing Clapperton expected a hospitable and dignified, but ultimately unrefined African to somehow fail him? Or maybe a combination of the two, or neither, or something else entirely. The legend, or rather, Tommy’s version of the legend, leaves enough of these doors open that it invites the same questions about the story itself. Look at how he insists on calling it a “false map,” as if there were such a thing as a “true” map. Look at how you accepted this implication without a second thought. The story doesn’t put on airs about putting on airs--it announces itself as a legend in ways explicit and implicit--but this guilelessness is a kind of guile. It makes the story friendly and natural, inviting your uninspected curiosity, your childlike attention.

In other words, Tommy drew a lie. He and I know this, but we’re presenting this false map to you anyway, an artifact of artifice.

TMYL: Right. And the tension created by that lie is what interests us in a lot of ways at Territory. It’s after all what inspired our name (and URL): the map is not the territory. Part of our aim is to explore this tension; what happens, if you’ll excuse the pun, when we investigate the difference between the lay and the lie of the land?

You could argue most interesting writing, and most interesting essays, explores that tension. It limns the uncomfortable, often unfathomable difference between the way we conceive of the world and the way the world actually is (if we can even say the world is actually some way and not just the sum of other people’s conceptions...but that’s a rabbit hole for another day). If you put me on the spot and asked me why I like essays, that’s the closest answer I might stumble towards.

That tension--and that uncomfortable space--also pops up in the moment when a first romantic notion about maps--as child’s play, as space for the imagination--abuts against a growing awareness of their connotations. That might be as good a reason to like anything, including maps: they’re beautiful and dangerous at the same time.

I come back again and again to the story of Sultan Bello and Clapperton (a story that I picked up second hand from a book, of course, and whose holes I populate with my own thoughts) as a tool for both artifice and accuracy. I like the story because it calls attention to its mapmaker and his motivations, to his awareness of a map’s social concerns. If we see an essay or work of prose as a type of map, that is as the translation of experience into a legible construct, we can carry this parallel over to the question of who’s telling stories and setting the terms of the world today. We might start questioning our own legends: the ways we interpret a set of signs on a map and the stories so well-known their provenances becomes doubtful.

And finally I like this story because I like maps. I don’t know if I know why I like them--but I figure if they cause most of us to express fondness without being able to articulate exactly why, then that’s as good a reason as any to direct writers we admire towards them. If a map claims a territory, we want to see what happens when those writers claim the map, knowing the full effects that claiming a territory implies.

Nick Greer is a writer living in and originally from the San Francisco Bay Area. He holds an MFA in Creative Writing from the University of Arizona and a BA in Mathematics and Music from Williams College. His chapbook, Glass City, a collection of vignettes about life in a fantastical modern city, is forthcoming in Salt Hill (2016). Find more about him here or @nickgreergkcin.

Thomas Mira y Lopez is from New York and holds an MFA in Creative Nonfiction from the University of Arizona. He currently lives and teaches in Athens, OH. Find him @TMiYL.
Posted by tommy at 6:39 AM