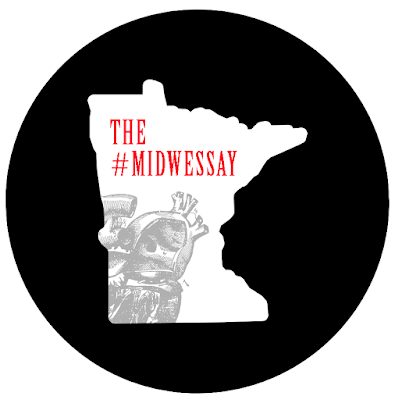 Blood Earth: Words on the Iron Range
Beth Cleary
*
I drive I-35 north out of St. Paul toward Duluth. The ex-urbs are farmland with For Sale signs or farmland for canola and corn, then small towns housing antique malls, truck stops or, at Moose Lake, a medium security prison.  I veer off I-35 at Cloquet, bound for Highway 53 and the Iron Range. 53 has a different feel: as on 35, increasing thickness of conifer, aspen and maple, yes, but here signs announce the Range itself. There is an historic marker citing 400 active mines in the early 20th century. There are signs for the “Range Cities “ of Virginia, Mountain Ore, Chisolm, and Eveleth. Signs for attractions like Iron World, the U.S. Hockey Hall of Fame, the Discovery Center Museum of the Iron Range. For destinations like Wirtanen Pioneer Farm, the Wellstone Memorial. For scenic mine overlooks.
Roadside signs appear beside clustered mailboxes and stand sentry on the edges of aspen, facing the highway: We Support Mining Mining Supports Us. We Support Mining Mining Supports Us. Red, white and blue, We Support Mining Mining Supports Us. “Us” means us people, and us “U.S.” There are also signs for dumping any elected official weak on taconite or copper nickel mine expansion.
There is no signage for the problem of what mining does, has always done, to the earth. What mining is as extraction industry, destroyer of geophysical story, disrupter of geologic time.
A marker at the Laurentian Divide rest area on 53 describes how the ancient rock of that spot channels waters in three directions: north to Lake Winnipeg, Hudson’s Bay and the Arctic; east and south through Superior and the other Great Lakes toward waterways that become the Atlantic; or through lakes and streams that form the southward flowing Mississippi River. At the Laurentian Divide rest area, I am at about the halfway point of the Mesabi Range, in the middle of the elongate trend called by geologists the Biwabik Range—Biwabik the Ojibwe word for “iron.” The Iron Range refers generally to three separate but geologically related formations: the Vermilion Range, northernmost and containing bedrock significantly older by millions of years than other parts of the Range; the Mesabi Range, the central, largest and most productive ore fields; and the Cuyuna Range, the southwestern reach of the trend.
Turning slowly and gazing in all directions from a place called “Confusion Hill” because the mind scrambles at the age and kinds of rock, I try to understand the “before” of what I see, the long “before” preceding settlers’ excavation. Everything seeming-solid in every direction has been gouged, cut, moved, in just 150 years. The mature-seeming trees are actually re-growth, after white pine forest clear cut. Hills by the roads are grass-grown overburden. Some lakes on the other sides of those hills are actually filled-in open-pit mines. St. James. Pioneer. Embarrass. They are stocked with young rainbow and lake trout every Spring before the fishing opener, because no fish that eludes the canoeman’s line in summer survives a winter in a fake lake.
The entire northland was the home, for centuries pre-contact, of nomadic indigenous people, who made camps for living in summer, and camps in different places for surviving winter. Then 19th century surveyors, precious metal speculators and eventually mining companies came, “buying” land that had never been bought-and-sold, scattering the native people, and luring tens of thousands of desperate immigrant men underground to hack at the oldest rock on earth. It’s the rock itself which fixes my attention. Its very age—between 2,500 and 4,000 million years old—gives solace to me, to the wriggle that is my life, all human life and enterprise, first and finally. The age of the rock is a rebuke to the humans and our violence. I learn about the rock of the Iron Range—its varieties and formations, deep time dramas of ancient volcanoes, rifts, collisions, orogenies—to atone.
We Support Mining Mining Supports Us. Men, women, descendants are buried across the Range in the undercrust of earth. Their bones’ and tissues’ calcium, zinc, phosphorus and other minerals return to the very soils miners moved to get at veins of ore. The iron running through their blood resorbs into the ground, the collagen in their bones dries slowly in the cold. And meanwhile rock forms, and extends, and cleaves and overcomes, in time we cannot comprehend and for purposes we cannot know, hard as our blasting may try.
* 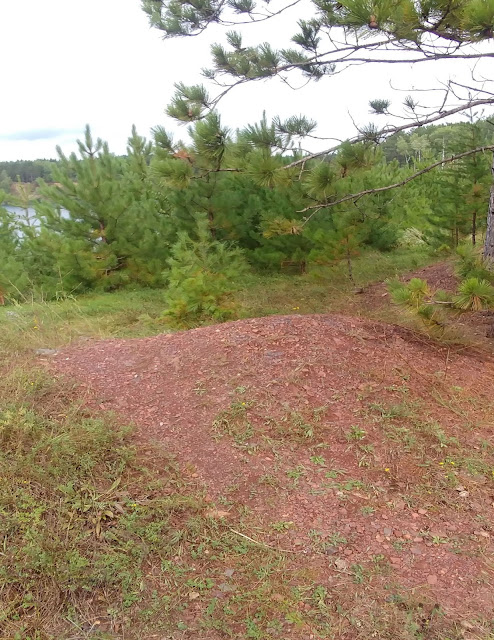 At the rim of the St. James pit lake, Aurora, MN. (Photo by Beth Cleary)
*

Beth Cleary is a writer, theater maker and educator. Her essays appear in Fourth Genre, After the Art, The Maine Review, and other publications. She is co-founder of the East Side Freedom Library in St. Paul, Minnesota.