dislocate, discussion (an obscure Live reference which is probably not worth making or noting, since Live turned out to be mostly not very good, which is sad because their first couple discs have some good moves and occasionally I want to karaoke "Lightning Crashes" because I know, just know, it would rock. Maybe this Friday?)

I'm looking at dislocate's Spring 2010 issue, the contaminated issue. It's designed well, for starters. Thank Brian Laidlaw, their design editor, for that, presumably: 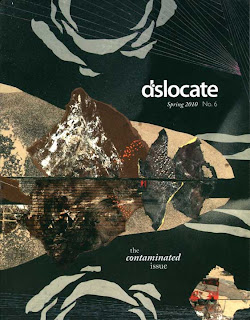 First let me start with some disclaimers about incest. Dislocate is the product of University of Minnesota's MFA program, a program generally on the rise, as far as I can tell, and also the program in which one of my very favorite writers, Charles Baxter, teaches. I have no real connection to Charles Baxter apart from having followed him and his work [read: semi-stalked? --Ed.] for about 18 years. I have no connection to the MFA at Minnesota. My wife is from Minnesota. I play a lot of disc golf in Minnesota (hola Kaposia, Inver Grove, Acorn, Cottage Grove, Bryant Lake, etc.). Several of my best friends are Minnesotans or have been Minnesotans. I have nothing against Minnesota. I also recently ran a marathon in Minnesota along with the nonfiction editor of dislocate, no less. My mother's family is from Minnesota (mostly, or where it bleeds into North Dakota). I was once on a road trip with my brother in Minnesota during the worst winter they had in 40 years in which I was driving my father's newly bought Isuzu Trooper, which is just an awful automobile, which had a problem with the heater, as in, it pumped out no heat. My brother and I could each drive for a half an hour tops before having to switch off so we could warm our near-frostbitten feet on the sad s-wisps of heat emanating from the feeble defroster since the vents did not work. The temperatures were into the -30s. At one point we stopped at Fleet Farm--or Farm and Fleet, I forget which name it's called in Minnesota--and bought several pairs of electric socks which consisted of a tube sock with an electric wire running throughout it. The net effect of the electric socks was that the wire would heat up and burn the part of your feet it touched, and your remaining foot would be frozen. They came with a disclaimer that read, we found out later and far too late, "not to be worn."

Also I know, quite well, several of the the nonfiction writers whose work appears in this issue, including one Lindsey Drager and Katie Jean Shinkle. I also know the nonfiction editor and marathoner, David LeGault. I know Jenny Boully's work very well, and know her a little less than well, I'd estimate. I know Brian Oliu only via occasional conversations, and the editorial connection we have in that I've published his (interesting) work before in the journal I edit, DIAGRAM. I've also published and admired the work of the judge of their "contaminated essay" contest, the great, gorgeous, and well-adorned Lia Purpura. Which is all to say that I'm not exactly a disinterested observer. And that this journal is, at least as far as nonfiction goes, literarily stacked. A good compliment for dislocate would be to compliment its nice rack. Which is to say it shows off well. It's not all curves, though.

Structurally, the issue is divided into five sections and a coda, and I confess I have no clue as to why this is, or what the sections mean. Perhaps it is referencing something that I am too dumb to know. Or perhaps it's constructing its own sort of structure as a book object, a thing too few journals try.

The nonfiction published in the "contaminated essay" contest section is a bit of a departure from the nonfiction published outside of the contest in this issue. For starters, the non-contest essays, Drager's "Photographs I Did Not Take" and Boully's "from not merely because of the unknown that was stalking towards them" are way more lyrically-affiliated than the contest winners (though there's elements of lyric in Shinkle's "Air Hunger," and Oliu's rocking the MS-DOS lyric love with his "C:\run iliad.exe" (though I'd like to point out that traditional MS-DOS would not allow that space in a filename, thus puncturing a little of the formal appeal of that play). The contest winner, Lehua M. Taitano's "Reticulation," comes complete with a neato graph behind the layout: 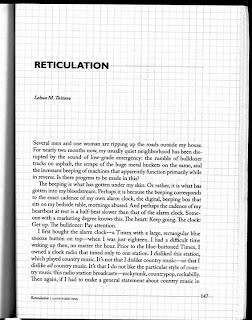 You figure out what the graph paper effect is for when you read the essay. It's related, mostly. I'm not 100% convinced of its necessity, but it was subtle enough that I didn't notice it through the first couple pages. Presumably this was in the manuscript, though I wouldn't put it past the designers & editors to spiff it up a bit with this feature.

As you may guess, the contaminated essay referred to is a way of talking about hybridity--the essay invites contamination from other sources, and their contest asked for work that fit this bill. DIAGRAM ran (and runs) our own Hybrid Essay contest, which is fairly similar in terms of the sorts of writing we're looking to promote.

Note to hybrid-writer-types: don't just shoot the poetry cannon at your essay and figure that makes it hybrid or contaminated. Well, maybe it's contaminated, but not all contaminations are net positives. I mention this since that's what we got a lot of in our contest, and I'd guess that dislocate probably got a lot of that too. Nothing against poetry--Drager's essay here is arguably more poem than essay, and it works. But poetry shouldn't be the default, and if you shoot bad poetry at a bad essay, you get a really bad essay-poem whose weakness is magnified.

Anyhow, I'm particularly interested in the two modes of Boully, one found here and found in her essay "A Short Essay on Being" in a recent issue of Triquarterly. (They're all-online now as you may have heard, and I think this is a good move.) If you know Boully's work, you know it tends to be very interested in fragment and language textures. However, I've read a couple of Boully's more overtly autobiographical essays, both about Thainess in some sense, and they are much more prose-transparent than what she's best known for. Her piece in dislocate is from an evidently forthcoming book more in the more language/fragment-oriented direction.

These two sorts of Boully essays come from very different places--one more linguistic, exploratory, overtly formal (see also her book The Book of Beginnings and Endings and her book/essay The Body), and one narrative. In "Being" from Triquarterly she's talking about being Thai and her methods of dealing with fools, wanting to make a more obvious point, and exploring a particular set of experiences in an occasionally bitchy (not meant here entirely as critique) and often entertaining way. In "from not merely..." Boully's main vector is much less obvious. The piece begins midstream in an "Also he was fond of variety," and proceeds in two strands--one a sort of footnote to the other. Or that's how it seems initially. The two strands vary in their primacy. The essay becomes a sort of riff on Peter Pan (imagination, power, gender), but being that's it's excerpted from a forthcoming book, it's less obvious to this reader how exactly it works as a stand-alone piece. Which is to say it certainly requires more readerly work.

I wonder what accounts for these two very separate--opposed, nearly--modes of essaying, if there's a way to resolve them in one Frankenstein monster essay or book. (Why are we asking to resolve them? That feels at the least ungenerous--we should want our authors to be split, and resplit, and resplit, but yet there's a readerly desire to resolve both into the one brain that sends out these transmissions.) I admire things about both modes--the pleasing difficulty and rich linguistic loam (that's a showy and wack phrase; sorry) of the stranger, lyric explorations, and the apparent directness (which reads as undefensiveness or vulnerability at times) of the narrative pieces. They require different sorts of readerly work, one displaying its arty peacock feathers, one doing less of that (on the surface at least--that apparent artlessness is also an art, as we know). There are downsides in each mode that could be rectified by the strengths of the other. The apparent plainness feels a little easy at moments, maybe disingenuous, I've thought in my more suspicious moments (though this is probably part of comparing the "easyness" of the prose to her other work). I find myself wanting those linguistic fireworks to pop and illuminate the night, to make sure she and her readers earn their way to the important moments. And in some of the more prose-opaque essays it's easy to get tired and yearn for a a little bit of transparency or light to filter in. I'm not really pulling any conclusions from this since I don't know what I want, but I'm interested to watch and see if these two Boullys converge or diverge.

I don't find myself particularly interested in Josh Garrett-Davis's "Pratincole." It lacks the motion and energy I liked in some of the other essays in the issue, though it definitely demonstrates another strand of the dislocate brand of nonfiction (which is clearly branded to be more expansive--smart, dislocate, smart). Dude certainly has the knowledge. And a wilingness to drop that know-how bomb on us. Yet as a reader I am a flighty breed. I need immediate tension--vulnerability--energy! So I turn to Nick Neely's (presumably no relation to Indiana poet by way of Chicago and Alabama Mark Neely) "Tidewater," which has the story and energy to roll the tide over us and to hold my attention. It's less interesting on the sentence level (though its apparent second-person strategy is a bit of an odd one--maybe not even the right one--and there are some great licks throughout), but the story is pretty great, so that can carry us a ways. It's very narrative, though. Though, narrative is an extremely powerful force. Watch enough non-narrative films (Hello, ha ha, Dali, for instance) for long enough, and you start to really badly want some transformer to attach another transformer who is threatening the existence of good-looking teens resulting in a set of cool explosions which lead to narrative outcomes, because narrative--even just a hint or threat of it--brings motion and direction--stability! energy!--to pretty, abstract, intricate things.
Posted by Ander at 1:30 PM

Email ThisBlogThis!Share to TwitterShare to FacebookShare to Pinterest
Labels: dislocate