Safari, Mama, Hot Boy, Serv—these are the names of a handful of graffiti artists in my small, Southern Ohio community. My favorite street artist calls them all painters, though until recently, I would have called them writers.  After all, that is mostly what they do: write, again and again, their names on brick walls; down alleyways; in stickers plastered over utility poles, slapped on the back of No Parking signs.

But that is not all they do.  Some create collages using carefully arranged stencils.  Others paint free-hand: a world of color, shapes, and mystery. 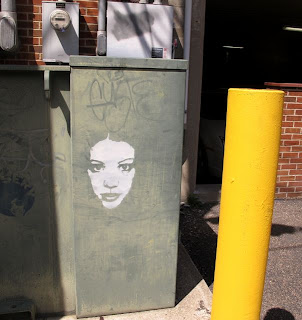 I know some people don’t think of street art as art at all, but trash: destruction of property, evidence of gangs.  But where I live, in the foothills of Appalachia, a place of shuttered brick factories and an old insane asylum, a place of trailer doors kicked in for drug raids, of weeds and of rust—graffiti does not consist of gang signs so much as life signs, evidence of a searching consciousness, of a struggle. And where I live, graffiti is not plastered on active subway cars or cared-for houses so much as abandoned buildings, desolate alleys, places of neglect and waste and sorrow—places that are already scarred.

One artist did a large painting on a highway bridge, targeting that spot specifically to cover up obscenities scrawled there by a rapist.  One painted “Serve + Protect?” on the sheriff’s department, the police station, and the courthouse walls (before he was caught). Someone has been painting “Happy” in red bubble letters, shaped like balloons tied together with string: Happy at the back of the slum apartments, Happy in the alley paved with glass, Happy on the vomit-covered dumpster. 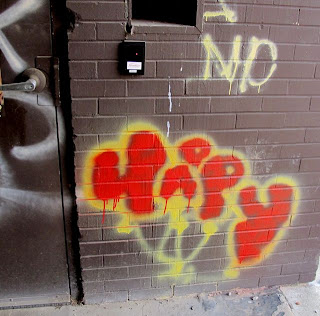 How is this an essay?

How is it not?  Who’s writing all these messages?  Why are they writing them?  How? Who is it for?  If the purpose of writing is to communicate, entertain, intrigue, sing, or challenge, graffiti is a mystery—the only mystery I know—that is alive, that is ongoing, another poem around this corner; another chapter down this street, appearing overnight.

If the definition of essay is “to try,” what is trying harder than the making of covert, illegal art, a making often conducted in darkness, under extreme time constraints, physical pressure, and the threat of great personal peril?  Street artists have been chased by drunks and junkies, tackled, heckled, threatened, and of course, arrested.  Painters jump fences, squeeze under wires, scale walls, dodge trains, lean over rooflines, dangle their bodies over streets—all for the chance to say something that may or may not be allowed to live.

What is a purer attempt than to make art many people hate, most people don’t even see, and which will likely be erased or defaced in a manner of days?

The first graffiti was made by a Neanderthal in El Castillo, Spain.  He pressed his hand on a cave wall, then blew red pigment around his hand’s shape—a street artist taught me that. 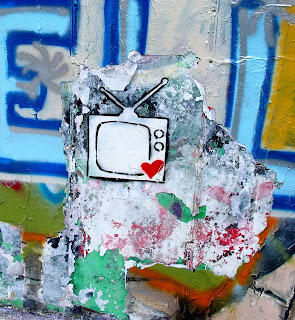 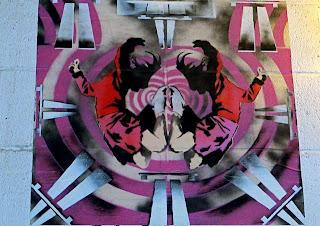 A new essay now: Safari, who has scaled the highest buildings in town to write that name, large and white, has someone painting alongside of him or her: Peach.  I think Safari is a man.  And I think Peach is a woman, and here they are, essaying together, on the top of a brick building: PEACH on one side, SAFARI on the other, covering almost the entire back, paint dripping down like fifteen-foot fangs.

They would have had to scale the building; lean over the roof (a six-story drop), bricks pressing into their stomachs; and write upside down, using rollers with extensions—all to say only one word each: their names.

I’ve been a writer for most of my life.  But never before have I felt the impulse to create as much as when I stood in an alley, gazing up at those names.

I wanted to say something then; to reach out to a stranger; to make him feel alive, as I did; to make him turn around.  To be heard, to be seen, to be recognized—that’s what graffiti is essaying: I was here, I lived, I tried, I tried, I am trying—no matter what you think of me—still. 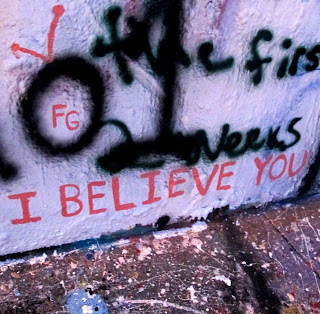 All photos by Alison Stine.  All art belongs to the artists.