12/14: Dustin Parsons on Ghosts in the Essay


One day, when my father grows too old to work, we will have to tackle the shop. It is a nearly 1000-square-foot structure full of the equipment he needs on a regular basis to do his job as a cathodic engineer in the Kansas oilfields. The wind beats against the walls and currents of air lace the legs of anyone inside. There are many stations where different kinds of work are done. Many shelving units full of parts he needs routinely in his profession. I assume many sons and daughters my age consider it—how much difficulty there will be in sorting the belongings of a parent. I think about it a great deal, considering what much of his shop contains are parts to a job I don’t know, pieces of work related paraphernalia that I have no idea the value of or the use for. His shop is vast. It contains the equipment and machinery of the oilfield he has worked in most all his life. He is also an avid woodworker, and though I know the basics, there are machines in his shop that mystify me. He has two vehicles in various stages of rebuild stowed there.

But among all these various interest and spare parts are the manuals he keeps. Pages and pages of exploded view repair guides for all manner of machine. They are like phonebooks—thick and onion-skinned. They have greasy prints all over the covers: 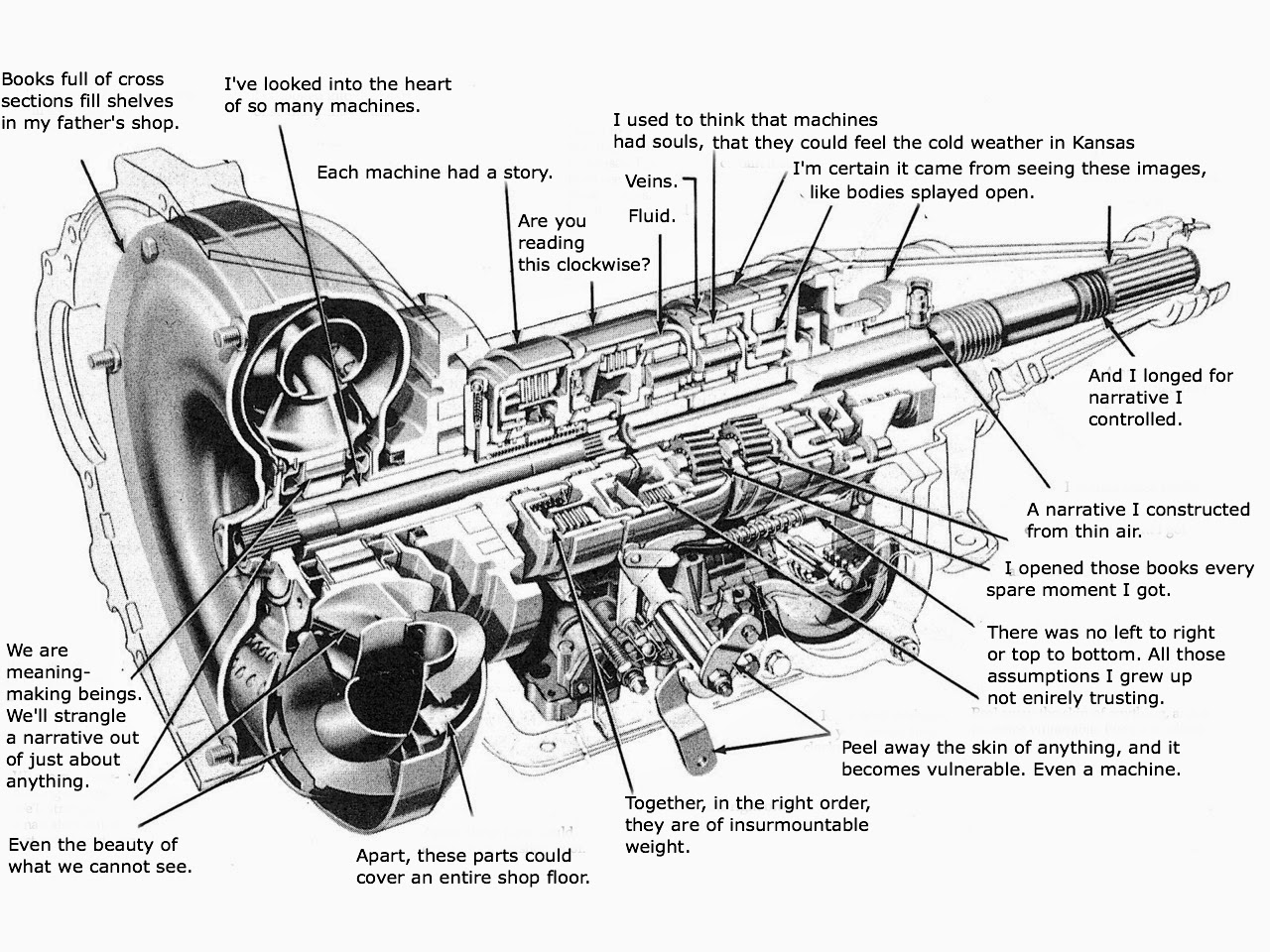 I’ve been flipping around in my worn copy of Theresa Hak Kyung Cha’s groundbreaking book Dictee recently. The experimental form of the autobiography, where “found” materials were combined with Cha’s own prose, captivated me for a long time. I was assigned to read it in graduate school, and loved the book without a clear understanding of why, but when I looked again recently, I realized it was because it was its graphic element.

The photographs were what grabbed my attention immediately. How did these subjects fall within the lens of the photographer? They were so mysterious upon my first reading because there was no attribution, no caption. The context made clear who the subjects were, but that dialogue between the image and the text, both in their own ways incomplete, made real sense to me. The lens of the writer placed them in positions of power and importance.

This was at the exact same time as I helped my father clean out his shop back home, and found the “exploded view” diagrams of carburetors, transmissions, and regulators he kept for work. Cha had already shown me that form could influence context without sacrificing honesty, emotion, and the basic tenants of good writing, and the diagrams gave me the medium upon which to place text. Her emotions were raw on the page due in large part to the dialogue the text conducted with the images, and then there were the charts of the acupuncture spots and cross section medical diagrams of the esophagus in the center of the book. I’d always written them off, so to speak, before. But after seeing those “exploded view” diagrams of my father’s, everything began to fall into place.

Cha couples the esophageal diagrams with a broken bit of prose that mimics the act of troubled breathing. It is clear that the text is meant to mimic the troubled breathing, and one might be tempted to see it as a gimmick. But as the stunted sentences lodge in the reader’s mouth, one can’t help but glance at the mechanics that are failing them as they read, the medical transparency of such silencing. The assignations of each failed part. The figures are faceless, empty of emotion (specifically the hauntingly grey outline of head and torso with only the throat animated in black, like a voiced ghost). Labels explore the singular jargon of the system, and one finally sees how delicate the act is, how easily it can go awry.

What made it work was the lack of a one-to-one correspondence between the text and the illustration. Suddenly the medical handbook from which the illustrations were lifted worked against the clear labels. Everything that once looked instructive now took on a menacing pallor.

This marriage of text and image seemed like a way for me to communicate in a personal way. I’d seen great artist/writers with shiny new graphic memoirs and graphic journalism and I admired the way the images were rough and beautiful all at once. Joe Sacco’s Palestine and Art Spiegelman’s In the Shadow of No Towers are collections of single-page mastery. Full of menacing images and attitude-laden prose, the author/artists seemed to be fully in control of their message.

I was fascinated with mechanical schematics even before I stumbled upon them in my father’s shop. The images that worked best were ones that held permanent residency in my head because of the context under which I encountered them, like this picture, sent home with my son upon returning to school this academic year:

This scrap of visual order gave me ideas about myself and my world. My experiences superimposed (or, in this case, captioned) within the frame allowed me to make admissions I might not make, and the images also forced my writing to go in directions it would not have otherwise spread. Like water poured into a crevice, one can only fill what space one has. It is a form of aggressive ekphrasis. My next intuitive leap might be guided by the image, and like a received poetic form, my writing opened up to the tangential.

The thing about the text/image relationship is when it is done well, the text and the image very often don’t speak right at one another. Cha’s example shows two elements in conversation, but they dance rather than shout in argument. That medical page spoke to her, but how she returned her voice to it made it art.

The physical manifestation of a narrative—the length of its paragraphs, the speed of its sentences, the selective choices in grammar—has to be a factor. In a new age where graphic novels and illuminated poems are a part of many literary journals, and some devote themselves to the possibility of hypertext link art and diagrams, it isn’t so peculiar to think that images will play a major role in online literary magazines, e-books, and avant-garde bookmaking.

So is this the next phase of the physicality of narrative? We are already born consumers of image, taking in more in one day than a generation before us took in in a week. A month. We have incredible endurance for images.

The public domain almost does seem like a place to me. It is like the seedy back alley of photography where old stuff gets thrown out. I pick through the trash. It is like a shop with so many things in it that I don’t have the words for. Like my dad’s shop.

Truth: my greatest fear for my father is that he never reaches that age where he is able to retire. My greatest fear is that my time to turn over his shop will be postmortem. Cha lost her life in 1982 just after her book was published. Her death was tragic, made more so because it happened just after her book was out. Suddenly the images, the grainy pictures and poetic meditations on death and suffering became prophetic.

Language can stick with us, but an image can be burned in our brain. An image can be a trigger. How, I ask myself now, might I respond to those volumes of machine diagrams in my father’s shop after he has passed? The question can hardly pass beyond my deep interior to land on this page. He is in good health, still working. But I can tell you the conversation between myself and those images will be different. I might look inside those cold machines on the page, past their metal skin and into their meshing gear organs, and see him again.

Dustin Parsons has work published or forthcoming in DIAGRAM, Seneca Review, Pleiades, Indiana Review, Crab Orchard Review, Fugue, and others. He has recently won the American Literary Review fiction award, the Laurel Review fiction award, and been printed in Keeping the Wolves At Bay: Emerging American Writers—an anthology from Autumn House. He's the recipient of a NYFA nonfiction grant and an Ohio State Arts Grant in nonfiction, and is associate professor of English at SUNY Fredonia.
Posted by Unknown at 5:00 AM