Often, when litmag editors are asked to explain "What I’m Looking For," I’ve noticed they will say something like, “work that grabs me by the throat, that sings to me, that I love.” To me, it always sounds like they’re talking about love at first sight.
This might sound horrible, but I almost never feel that way.
Don’t get me wrong: I do come to love a lot—probably even most—of what we publish in Creative Nonfiction, but it’s more the sort of feeling that develops over time. Not so much breathless passion as a fully rounded appreciation based on deep familiarity that typically kicks in somewhere around the second round of edits.
But before that point, there are any number of pieces I could fall in love with.

When I first started working at CNF, 12 years ago, we were a much smaller organization, and submissions were entirely on paper, piled high on bookcase shelves. Back then, I read—or at least skimmed—almost every submission.
These days, the volume of submissions is much greater, and we have a team of screeners. Now, I typically read only a fraction of the submissions we receive—maybe 10% for any given issue—and the overall quality of the work in that smallish pile is generally pretty terrific. Really, it is. We could probably accept any of those pieces, and it would all turn out just fine.
I don’t know whether that’s encouraging to know, if you’re a writer.

We’re all always looking for “the best” work, but what does that really mean?
I mean, the whole idea of “the best” is kind of bullshit, isn’t it? Personal taste of the editor is a factor, but it’s only one factor. Quality of craft and story are certainly factors. But beyond that, what we’re really talking about is “best fit.”
Maybe, instead of “the best,” it would be more helpful to describe what editors are looking for as “the work that best helps us make the thing we’re trying to make.”
As a writer, you can’t really guarantee a win—an acceptance—but there are some things you can do to help your work make it to the finals. For example, if there’s a theme—and at CNF, most issues have themes, announced in advance, with a specific call for submissions—how does a piece speak to that theme? Be smart. Read calls for submissions carefully. As in applying for a grant or a job, try to figure out what the need is, and how you might fill it.
Does a piece say something new or interesting or unexpected? This, too, is mostly on the writer. The thing with most major life experiences is that they take us, individually, by surprise. They’re new, every single time. But of course, very few experiences or thoughts any of us have are wholly original. That doesn’t mean they’re not worth writing about, just that it’s helpful to be aware of context.
There are also considerations that the writer can’t control at all. Compiling work for an issue is a lot like making a mix tape (or a playlist). As editors, we’re always asking ourselves: does a piece play well with the other pieces under consideration?
In the final discussion, after I’ve passed 15–20 essays to our founding editor, Lee Gutkind, to whittle down to the 5–9 we’ll publish, there are usually some either/or choices: pairs of stories similar in subject or story or circumstance. We can take one of the pair, but not both. Sometimes we accept pieces because even though we don’t love them, we know our readers will. And then, there are a couple we just like more than a couple others.
It’s a little anticlimactic, sometimes, really.

But here’s the thing: recently, I did have the completely delightful experience of falling head-over-heels in love with a piece. [Swoon.]
It came with some hype: our coordinating editor, Matt Spindler, who does the hard work of coordinating our many volunteer readers and also sifting through their responses, had sent a heads-up about this really cool piece, submitted for the “Weather” issue and shaped like lightning.
And I’ll admit I thought, shaped like lightning? Really?

Every issue of Creative Nonfiction has a regular department called “Exploring the Boundaries.” It’s for “experimental” work, whatever that means. I don’t want to get too bogged down in it here—whether or not there are boundaries and, if so, where they are, and sez who, and so on—except that section gives us a chance to accept work we probably wouldn’t, otherwise, and for whatever reason (maybe just because it’s its own department, though I don’t actually think that’s it), the work we publish there has a different quality to it, somehow.
But even there we probably wouldn’t publish a piece shaped like lightning. Especially a piece about lightning, shaped like lightning. I mean, it’s kind of hokey, right?
Wrong.

It’s impossible to satisfactorily explain the experience of falling in love with a piece of writing. Really, you should stop reading this and just go read the piece itself, and fall in love with it yourself.
It’s “Recorded Lightning” by Amaris Ketcham: 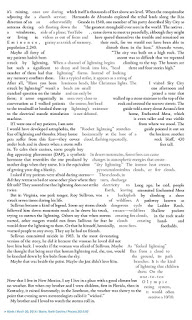 (Sorry, the whole thing’s not online. But you can click on the image above to blow it up a little or buy the whole thing here.)
I’m only going to ruin it by trying to describe it. Don’t say I didn’t warn you.

Now, maybe it’s just that I’m a lazy reader, or maybe I just like things to be pretty straightforward, but I don’t much like things that make me flip back and forth.
The lightning essay runs down the page in three zig-zagging threads, numbered 1, 2, and 3. 1 and 3 are full black; 2 is a gray. Immediately, the format presents a challenge. How are you supposed to read it? Down? Across?
Obviously, one was supposed to start at the top of 1 with the line: All of my patients had been struck by lightning. From there, it just gets weirder, bouncing from story to story, topic to topic:
The author’s experiences working as a physical therapy technician; the odds of a person’s being struck by lightning; the story of one Roy Sullivan, a park ranger who was struck by lightning seven times in his life.
Reading it that first time, I tumbled through the different stories—all, in some way, involving lightning, though the connections between the stories were not at all clear, rather the piece flashed and flickered as it moved along (and maybe sometimes it was a little annoying, reading long lines and then short lines, and was I supposed to be looking across the whole page?), and then I hit the end of the first thread:

I won’t even try to describe the rest of the essay. Basically, it’s a lot of information—possibly more than you ever thought you needed to know about lightning, except that it never feels like too much information. And there’s no good way to summarize the plot—such plot as there is—without giving it away.
But when I got all the way to the end of the third thread, I swear to god, I did a fist-pump and yelled “Fuck, yeah!” out loud, even though it was late at night and everyone else in my house was asleep.
I might have been cheering 50% because it was awesome, and 50% because it was especially awesome that a lightning-shaped essay about lightning was awesome.
And I guess that’s what love looks like.