V. V. Ganeshananthan: On Essays, Assays, and Yiyun Li’s “Dear Friend, from My Life I Write to You in Your Life”

Excerpted from How We Speak to One Another, an Essay Daily anthology of essayists in conversation.

I am guilty of what many people would consider excessive rereading. The most cherished books of my childhood remain among the most cherished books of my adulthood; if a story resonates with me, I will seek out its best sections over and over again. Those pages will become thumb-worn, and I will intentionally let the binding break there so that, eventually, I will find those preferred places more quickly. But even with all these habits and customs designed to keep my most precious words close at hand, there is an essay I have returned to so frequently that some time ago, even its presence on paper ceased to satisfy me. How to carry it with me, then? An odd solution—I took a picture of one of its passages. Now I keep it on my phone so that I can read it whenever the urge seizes me. There it is in my library of photographs: I can flick my finger to turn from

Unlike all the other pictures, the one of the essay exists unmarked by time or place. It isn’t located anywhere, exactly, but on the page and in my head; I don’t remember the second that I took it, but every time I turn to that picture to reread, I reenact it anyway. I carry it with me as a talisman not of protection, but of uncertainty. Stripped not only of its page numbers but also of the name of the friend who wrote it and its title, it articulates both a question and a terrifying possible answer to that question—an answer that points to my own choices as someone whose two obsessions are the past and guilt over obsessing over the past. 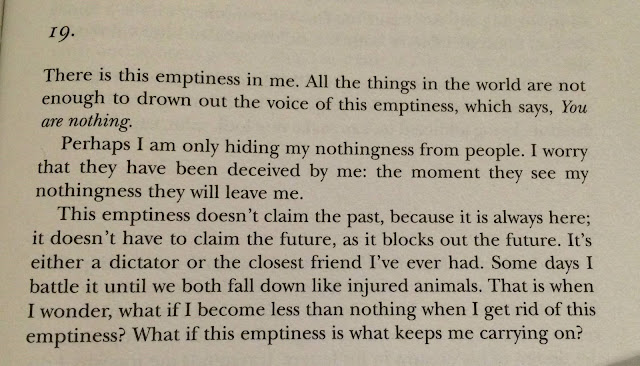 Of course this is the picture from my phone. The essay from which it is taken, Yiyun Li’s “Dear Friend, from My Life I Write to You in Your Life,” first appeared in A Public Space and then later in Best American Essays 2014. (Now it appears as the opening chapter of Li's first nonfiction book.) It is impossible to ever finish reading. This year, I assigned the piece to my students. (I should add, by way of disclosure, that I am friends with Li, although I have never spoken to her about the piece.)

I tend to look at the picture in between destinations, appropriately enough; it is about everything and nothing and therefore perfect reading for traveling. Because I have moved so often, it sometimes occurs to me that this is all I have done—traveling: leaving one place and arriving at the next just in time to plan leaving it. (No wonder I find myself at home with, among others, Calvino.) As a writer, and perhaps especially as an essayist, I am simultaneously bound and freed by questions of the past; I am often writing about an experience I wish had gone differently. I am attempting to reconcile myself to what has happened, although really, I would prefer not to; I want something else—I am a train for which the engine is regret. I want to honor the past as I destroy it. Is it possible for me to be otherwise? I am always wondering what I could have done differently, or what I am, in the present moment, doing wrong. Is it useful to ask these questions as each second falls away behind me, impossible to unravel? And if not—must I only ask questions that are useful? What if this emptiness is what keeps me carrying on? What if, as a writer, I am made of my warring obsessions? The past, and its mirror-hall of endlessly reflected regret?

This particular essay reinforces these ideas, and yet, although it is a talisman of uncertainty, that is comforting rather than disturbing. Unlike most other things I read, which give me the sensation of reading (albeit closely) about someone else, this essay gives me the sensation of reading about myself. This used to be a feeling I could get only from writing, and not from reading; reading was about entering other people’s pasts, other stories. I never saw myself on the page. But Yiyun’s consciousness opens to me in such a way that I discover something new about myself every time I read this essay; I am able to ask myself another question, and also forgive myself for my past a little bit more. What I want is this: to say, the past is not my fault. Yiyun’s essay ventures something better: it may be my fault, and that’s acceptable.

I can remember a time when I read not to reconcile myself to the past, but to discover the future. I am not quite sure when I crossed the line from one kind of reading to the other.

“Dear Friend” is an unusual essay, eliding easy questions of theme and form, and offering among its gifts openness, intensity, and that capacious consciousness. In reading I get the sensation of entering a bare, open, beautiful room—being unable to see the walls—having no desire to leave. This is all the more remarkable considering its spare, decisive structure: twenty-four comparatively short, numbered parts. Of these, it is that nineteenth that makes me feel the most.

At first, I thought that the essay was about being existentially troubled, and then I thought that it was about unhappiness, and then I realized that it had announced itself as being about time: before and after and in between. But for me, existential woe and unhappiness and time are tied up in one another, and of course with writing, and probably with essays themselves. What I want out of an essay is, perhaps, not original: When I teach essay writing, I ask my students to think about the central questions driving each essay. What is the subject? What is it that the writer hopes to learn by writing about this subject? How does the writer arrive at an answer? It isn’t interesting for me to begin an essay (at least, a personal one) by asking a question to which I already know the answer; if I knew the answer, I wouldn’t have to write it.

But this approach also presumes that knowing will be possible. The modern world, with its urges toward mindfulness, often invites us to be in the present moment, and I have to admit that my skepticism of this may have been rooted in one suggestion that sometimes underpins that one: that being engaged in the present moment means that we will know ourselves better and therefore be happier. “Dear Friend,” on the other hand, with its unapologetic depiction of ostensibly contradictory feelings and ambitions and thoughts, gives me a strange kind of permission to fail to understand my own inconsistencies, and to be both interested and unhappy in the present. It opens the door to uncertainty. I am grateful for this, engaged as I sometimes am in a flat daily performance of happiness. That performance is often a strange counterpoint to my changeable, contradictory interior. “The present does not surrender so easily to manipulation,” Yiyun writes in the third section of this essay. She defines the present as truer, then—but not necessarily happier. I am not sure, and the essay is a space in which that uncertainty is fine. One does not always arrive at knowing.

Yiyun does not write as though she is able to answer the questions she has raised about time. In an interview with Iron Horse Review, Yiyun herself points to the sixteenth section of the essay, in which she writes,


I had this notion, when I first started it, that this essay would be a way to test—to assay—thoughts about time. There was even a vision of an after, when my confusions would be sorted out.

Assays in science are part of an endless exploration: one question leads to another; what follows confirms or disconfirms what comes before. To assay one’s ideas about time while time remains unsettled and elusive feels futile: just as one is about to understand one facet of time, it presents another to undermine one’s reasoning.

To write about a struggle amidst the struggling: one must hope that this muddling will end someday.

Is there a silent but at the beginning of that second paragraph? At any rate, the central question need not be answered; this essay may be a good enough reason for me to stop saying that in my classroom. A question may just lead to another question.


What a long way it is from one life to another: yet why write if not for that distance; if things can be let go, every before replaced by an after. . . . the train, for reasons unknown to us, always stops between a past and a future, both making this now look as though it is nowhere. But it is this nowhere-ness that one has to make use of. . . . One has made it this far; perhaps this is enough of a reason to journey on.

The essay is, among other things, a manifesto for writing—but she does not stop at an after, or an answer; she stops on an if without any apology for how nowhere if can be. A picture on a phone leads from this passage to a photograph, to another photograph, with no definitive end in sight.

V.V. Ganeshananthan teaches fiction and nonfiction writing in the MFA program at the University of Minnesota. Her debut novel, Love Marriage (Random House), was longlisted for the Orange Prize and named one of Washington Post Book World's Best of 2008. The recipient of fellowships from the National Endowment for the Arts and the Radcliffe Institute of Advanced Study at Harvard, she is at work on a second novel, excerpts of which have appeared in Granta, Ploughshares, and Best American Nonrequired Reading 2014.
Posted by Will Slattery at 6:00 AM