Liz Prato: On Didion's Trail at the Royal Hawaiian

Joan Didion covered many topics in her canon of essays—Charles Manson, California’s agriculture belt, the Black Panthers, hippies in Haight-Ashbury, the Getty Museum and complicated grief, to name a few—but the topic that most of her disciples wish to experience for themselves is staying at the Royal Hawaiian Hotel on Waikīkī Beach. Many writers have told me “I’m obsessed with Didion staying there!” and many writers have blogged about their attempts to capture the essence of Didion’s experiences at The Royal.
It’s not a coincidence that Didion’s experience which authors most wish to emulate is staying in an elegant hotel in a tropical paradise. These same writers aren’t nearly as eager to visit a political prisoner, or hang out with semi-homeless drug addicts who have eschewed conventional hygiene. These writers want to sit in an elegant room with translucent curtains billowing in the trade winds, at a hotel where the private part of the beach is neatly raked every morning and roped off from the public riffraff. They want to lie by the pristine pool and know that, when they are within the hotel’s bounds, they are protected and included within a rarified societal set. Who can blame them? It’s a succulent fantasy, one that Hawai’i has been banking on for a over a century. So it doesn’t surprise me that writers wish to relive this aspect of Didion’s sojourn to the Islands. What surprises me is that they stop there. They cease following in her O’ahu footsteps and remain blind to everything else Hawai’i was, and is. The very reason Didion’s descriptions of the Royal Hawaiian are profound is because she set them against the unrelenting backdrop of violence and war and death.
Didion penned three major essays about her time in Honolulu, the longest of which is “In the Islands” from 1979’s The White Album. It’s written in three parts, marked by the dates 1969, 1970, and 1977 (one long paragraph attributed to 1975 also appears, seeming to act as more of a bumper in time/space than a stand-alone motif). Three distinct themes exist: Didion’s fragile mental state, the Royal Hawaiian Hotel, and war—although the word “distinct” implies these three themes have nothing to do with one another, which, I suspect, is the mistake many Hawai’i-going Didion fans make.
In their Royal Hawaiian essays, Didion fans render sentences that meander on for 66 words, or 71 words, or 81 words. They’re chock full of busy verbs and adjectives that appear both razor-sharp and flowery, and slightly archaic, as if plucked from a mid-twentieth century thesaurus. It’s an effort—unconscious or not—to imitate Didion’s style. Didion’s sentences, however, are not just long and full of Big Words. They have a push, a rhythm, and then a twist that lands someplace completely different from where the sentence started. They are no-nonsense poems.
In the sentences drawn by her well-meaning imitators, nothing really happens. At the end of one line, I knew no more than when I started it and, in some weird equation of physics, ended up feeling as if I actually knew less. That emptiness of these passages becomes the sum total of an entire essay or blog post describing an author’s re-creation of Didion’s stays at the Royal Hawaiian: nothing happened to the author. She was no different—aside from being slightly more relaxed—after undertaking her pilgrimage.
The majority of space in Didion’s “In the Islands” is consumed by war: prose concerned with the bodies of young men buried at Punchbowl Cemetery, the eternal pall of the Pearl Harbor attack hanging over Honolulu, the “they-just-keep-coming” casualties from Korea and Vietnam. By “space,” I don’t just mean the most words, the most paragraphs, the most pages, but—for me, at least—war also consumes the most psycho-emotional space. It fills me with a profound understanding of how completely and inescapably death permeates Honolulu.
Life at the Royal Hawaiian takes up the second most space on Didion’s page. She writes of the exclusivity—tacit and otherwise—shared by the Royal’s guests: honeymooners and gray-haired ladies and mothers and daughters and industrialists and socialites. Afternoon tea is served on rattan tables, fresh papaya is eaten on the terrace, ukuleles are strummed on the lanai. Updates from the outside world arrive at newsstands two days after events occur, after the rest of the US has absorbed the initial shockwaves, further reinforcing the bubble protecting the hotel’s denizens.
The least amount of physical space (words, sentences, paragraphs) is given to Didion’s fractured emotional state. She admits to having lost faith in people’s ability and motivation to choose the path that will make their lives, and the world, better. More often than not, the news informs her, people select the path of violence.
We all know—as readers, as writers, as consumers of language in any form—that certain words carry more weight than others. I wondered whether the relative weight of the words in each section, on each theme, were bigger and more galvanizing than its actual length. So, I conducted an experiment: First, I combed each section for the words that jumped out at me. In this way, the data is entirely subjective. These same words may not stick to another reader. But I like to think as a writer, if nothing else, I understand what seizes the attention of our heads and our hearts. Next, I dumped the words from each theme into a computer program that randomly generated three word clouds (one for each section). To maintain aesthetic continuity, I used the same font and shape for each word cloud, and I didn’t alter whatever image was first created. This is what each looked like: 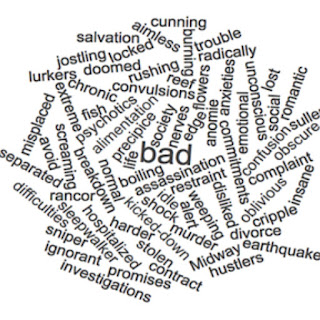 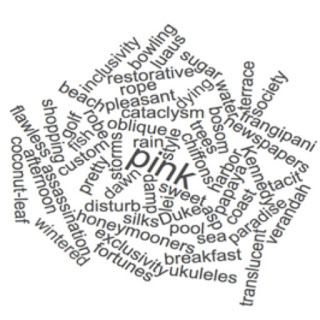 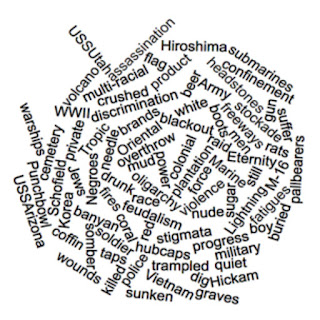 Now, if you were going to immerse yourself in any of these word clouds, which would you choose? The one containing cemetery and oligarchy and Hiroshima and stigmata? Or the one comprised of weeping, insane, murder, and psychotic, with BAD big and bold and in the middle (I swear, this is exactly how it was randomly generated)? Or do you want to hang out in the cloud with sugar and paradise and fortunes and beach? Sure, asp and cataclysm and assassination also appear in that cloud, but certainly such negativities can be overcome by sweet and luaus and silk.
This seems to be the impression that certain readers take away from “In the Islands”—that while this other ugliness, this war business, lingers out there, it can all be forgotten on the pink terrace of the Royal Hawaiian. The writers who wish to walk in Didion’s footsteps approach the hotel in paradisiacal isolation, not as part of the whole, and not how Didion intended it: as a statement to however much we desire it for a week or two, we cannot escape the ravages and violences of our culture, or the violences of our souls. The Royal Hawaiian Hotel may be Eden, but an asp always curls around the rope that separates its private beach from the public.

Liz Prato is the author of Baby’s on Fire: Stories (Press 53). Her essays have appeared in numerous journals, including Hayden’s Ferry Review, Baltimore Review, Hawai'i Pacific Review, and Subtropics. She teaches nuts & bolts craft classes in Portland, and elsewhere. Liz is currently working on a linked essay collection that examines her decades-long relationship with Hawai'i through the prism of white imperialism. Despite these essays mentioning Joan Didion, George Clooney, Ben Stiller and Pierce Brosnan, she really isn’t celebrity obsessed. I swear. www.lizprato.com
Posted by Ander at 7:33 AM