Dear Essay Daily readers, we welcome you to the 2017 edition of our Advent Calendar. This year our theme is Recoveries, meaning that we've asked our contributors to recover essays that are in neeed of recovery. That is, we've asked them to write about essays (however they think about or define that term) that they feel are obscured, lost from the canon, overlooked, erased, or simply underread, like, for instance, the Lola Ridge essay below. When possible we will also reproduce or link to the text of the essay itself. We invite you to spend time not just with the advent essays but with the essays they mean to direct your attention to.

We still have a few dates available later in the advent, so if you're sparked by one of these and would like to participate, send a query to Will or Ander (contact on the right). In the meantime, let us begin our seasonal devotion to others' words. —Editors

Touching on two essays: “A Menace to Liberty” by Emma Goldman and “Woman and the Creative Will” by Lola Ridge 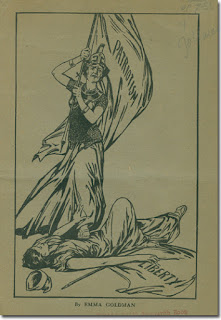