If you're a regular reader of this space, you know about our upcoming project, What Happened on June 21, 2018, in which we're inviting as many people as possible (writers, nonwriters, artists, amateurs, pros, collagists, musicians, whatever) to pay attention with us to a day in June.

While you don't need to register your interest via the google form, we'd love to have you do so in order to plan better.

Really, all you need to do is wake up on June 21 and write about what happens that day, however you understand that question. When you're done, give it a good edit, and send it in to us. (We'll collect these submissions via a google form.)

We'll publish as many of them as we can. We're guessing these will run through, at least, July.

This endeavor comes out of a handful of texts: Christa Wolf's One Day a Year; a special issue of Le Nouvel Observateur featuring 240 writers writing about what happened on April 29, 1994; a brief Nicholson Baker essay reproduced here for that project; and, I suppose, I'm also thinking of some of Juliana Spahr's day poems like this one. While that special issue of Le Nouvel Observateur was a who's who of literary 1994 (click to expand)— 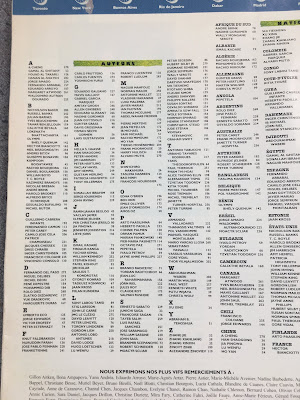 —we're interested in a more democratic, anyone-can-play approach to trying to take a bite out of one day this coming June. So whisper the idea into anyone's ear.

While talking about the project with my friend Farid Matuk he turned me onto the only two issues of an occasional magazine called ATTN:— 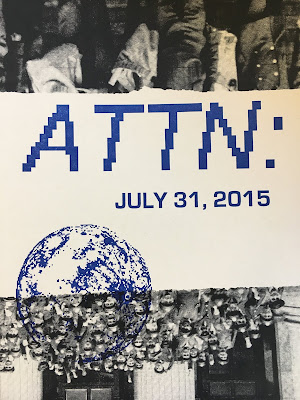 —that published an issue devoted to July 31, 2015 and one on April 25, 2016. It appears to be ongoing, but a new one hasn't arisen in some time. To get a copy you'll have to buy one (though they look hard to find...) or, as I did, head on down to your local totally kickass international poetry library (I'm sure you have one where you are, right?). I'd recommend buying a copy or a subscription, and maybe they'll keep this project up.

(Attn ATTN: folks: perhaps you'd like to join us in June? You seem to like an occasion for art.)

The project of ATTN: is similar to ours in its open-endedness, though ATTN: is oriented toward poems and collage-style lo-fi art. Still, it includes a number of what I would call essays, including a lovely piece by Aditi Machado, which I'll reproduce here (click to expand): 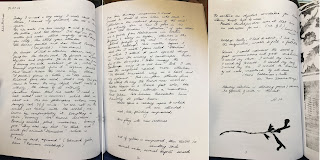 I love that it's handwritten—so personal, which is always welcome in an essay, and yet so few of our essays are handwritten or hand-drawn (this one's an exception)—but also because it's going right at some of the questions of attention that interest me: what attention is (especially when it's paid, as we say in our odd turn of phrase, over an extended period) and what relationship it has to perception. What the relationship is between the subjective and objective, which is to say the central question of the essay, being the relationship between self and world or I and eye. Machado's assembly of quotations helps track one way through these questions, and I'd recommend you spend some time with it.

I also liked, for only some of the same reasons, this essay by Harold Abramowitz and Andrea Quaid (click to expand):

What is there to say about a day? Does the act of trying to say or think or observe something about a day change the day? "Maybe today was about what we are doing right now, I don't know," they say (it's unclear who is saying what, this being collaborative—and that uncertainty starts to push a little on some of the tenets of nonfiction or the essay in ways that feel worth exploring further). What is today about? What is the point of a day, or of today, or of any day? Is "this day…like a little world"? Is it "like leaving the world alone?" Well, let us find out.

Here's another contribution to the first ATTN: by, I think (it's hard to tell—attribution is not a primary focus of this project) Donald Guravich: 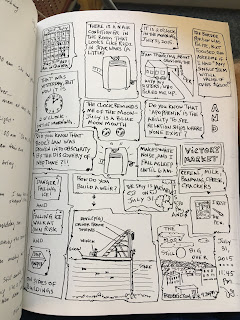 It's hand-drawn and awesome. And I'll include only one more, this one from the second issue, on April 25, 2016, by Craig Dworkin, which collages news and happenings on a number of levels, sort of in the style, perhaps, of Harper's "Findings" feature: 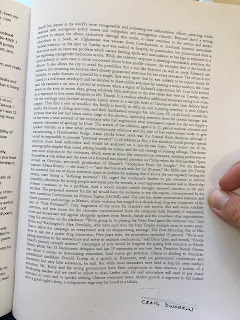 By reprinting these and directing your attention (or your attn:) to them I mean not to suggest that these are modes you should be inhabiting, but that these are a few of the many opportunities for attention that a day can offer. So think about joining us: it's about a month away. We'll remind those of you who indicated your interest in the form the week before, and if that's not you, still you should feel free to play along. That's the nice thing about a catchy song—it spreads, invites a mass accompaniment.