Beth Peterson, "Back to the Beginning of the Collection"

In 2009, I began writing a book about disappearance. I was living on the edge of a quickly-receding glacier: snowfields dissolving, small ponds and then lakes appearing in the place where the ice had once been. That same year, a professor of mine vanished while he was hiking a volcano; later, a friend took a 500-meter fall off a cliff in the small mountainside village where we were both living. For a time after this, it seemed the disappearances were well behind me, but then, ten years later, and seven weeks before that book would finally make its way into the world, another person in my life—this time, one of the most important—slipped away too, swiftly, without enough notice.
Now again this fall—just like ten years ago—I’ve been thinking about collections. In the first days and weeks after she was gone, I became a determined, then nearly-frantic collector of her things: her papers, her letters, her voicemails, her cards, photographs of us together, then photographs of her alone. I packed two huge suitcases full of her clothes and dragged them through several airports. I shipped 50-lb boxes of her books across the country and stacked them in the living room of my tiny apartment. I searched and searched for a single YouTube video she’d made of herself some years before. A friend asked gently, after learning I’d had to create a path through her things to my front door, whether I could just keep one or two particularly memorable items—a jacket, a favorite sweater perhaps—and give away the rest. I told my friend that I simply could not; that was not an option. Instead, I lived among the boxes for a solid month. When I finally brought myself to unpack most of them, I got rid of my own things to make room for hers.
Can a collection—I wonder—be a reckoning? Can it push back against loss? Against the threat of our own undoing?
The initial shape for my book—an essay collection—wasn’t driven by grief as much as exigency. I’m the sort of writer who plans out an entire essay in my mind—running, driving, walking the leafy, and then snow-covered, streets of my neighborhood—before a single word hits the page. I tried this with the book: recapitulating ideas and structures for a year or more as my running partner and I met for late afternoon or early evening jogs on a long dusty trail through the Missouri woods; we talked about field notes, paired chapters in ascending or descending order, linear and nonlinear chronologies, a constellation, and several borrowed structures. Each seemed reasonable for a time, but in the end, none of these gave me the traction I needed.
After two or three years of haphazard writing, I took a trip to the U.K. to visit friends. The afternoon I first arrived, my friends were still at work, and so I wandered, luggage in tow, into a small second-story museum in a university building. Most of the museum was housed in a long, sanctuary-like room with two-story dark wooden ceilings and arched geometric windows. The museum had coins, paintings, a dinosaur skeleton, and a host of scientific instruments, but then also other oddities: a two-headed pig in a jar, a plaster cast of baby in a uterus, a human skull tattooed with name and numbers, and several tiny bodies encased in fluid or glass—I couldn’t tell—and simply labeled “Homo.”
That museum, it turns out—like many of its time—was modeled after the 16th & 17th Century wunderkammers or “cabinets of curiosity” made famous by the Danish physician Ole Worm and his catalogue of natural and unnatural history, the Museum Wormianum. “I have collected various things on my journeys abroad,” wrote Worm, “and from India and other very remote places I have been brought various things: samples of soil, metals, plants, fish birds, and land-animals, that I conserve well with the goal of, along with a short presentation of the various things’ history, also being able to present my audience with the things themselves to touch with their own hands and to see with their own eyes…and acquire a more intimate knowledge of them all.”
Worm’s collection had started when, at 17, he had set off for a tour around Europe. Worm visited museums as he traveled to Italy, Germany, England, and France. Eventually, he began to collect objects himself: precious metals at first, but then taxidermied animals, sculptures, shells, and stones. Worm exchanged letters with other collectors, from whom he acquired more curious objects: a “unicorn” horn that Worm deciphered was actually from a narwhal, an egg that a Norwegian woman claimed to have laid. On the front plate of Worm’s book, there’s picture of the small museum that he kept in his own house in Copenhagen: 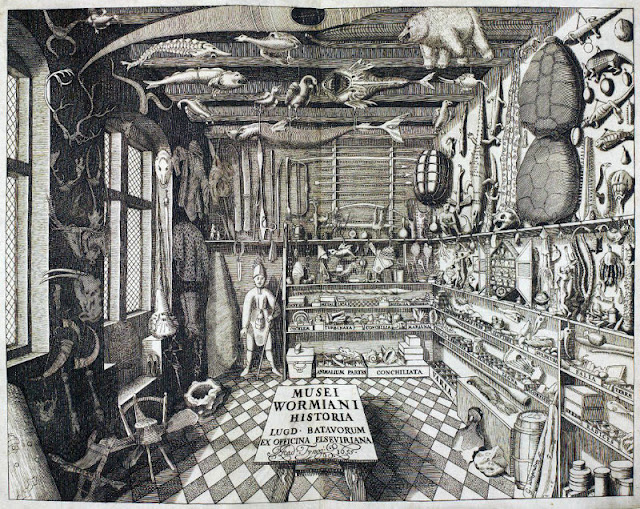 A wooden kayak hangs from the ceiling; on the packed shelves lining the walls are skis, sculptures, a harpoon, a globe, hunting weapons, animal skeletons, stuffed birds, tortoise shells, and metal coins.
The book itself, a 400-some page folio, began as a catalogue of Worm’s collection; there are dozens of woodcuts and notes about each of the artifacts from Worm’s museum, divided into four neat parts: minerals, plants, animals, and “artificiala,” or everything else that was man-made. Worm couldn’t seem to stop himself with just descriptions, though; he wanted to understand the artifacts, to begin to make meaning. “Lemmings do not fall from the sky,” for instance, Worm noted about the popular Scandinavian myth concerning the origin of these rodents, “they’re blown by the wind onto the land.”
In Worm’s catalogue—and in that natural history museum that led me to it—I found a collection built on urgency and on wonder. For Worm, the collection became an obsession, and both the artifacts and their descriptions became his own sort of essays on worlds far and near: ones he wanted to preserve, and ones that had already been swept away. The museum for Worm was a living thing and the catalogue was a way to extend the museum’s reach. Worm believed the museum’s objects were to be handled—not stored—and he famously brought various artifacts from his collection into the classes he taught at the university. The catalogue, too, scholars have noted was structured to follow a museum patron’s, or a reader of objects’, experience of seeing. “Reading sequentially in the inventory or catalogue would stimulate a physical promenade or movement of the gaze,” notes Mattias Ekman in an article on Ole Worm and the birth of the museum. Ekman goes on to add that the headings in Worm’s book “equal classes as well as rooms.” Other scholars have pointed out that the museum itself was organized the same way as the book.
After stumbling upon the work of Ole Worm, I began to notice artifacts—nonfiction pieces as sorts of miniature museums—in the books and essays all around me. There were the contrasted beauty pageant and Cherokee Chiefs that reveal “the mechanism of terror” in Joan Didion’s Salvador and the telephone poles in Eula Biss’s “Time and Distance Overcome” that remind readers “nothing is innocent,” even if not unrepentant. There were the animals striking “curious poses” for Elena Passarello; the wrecked ship that appears in Colin Rafferty’s “Surfacing,” and the idea of the specimen in Joni Tevis’ Wet Collection. There were the maps in Rebecca Solnit’s atlases and the small rubber animals that prompted Donovan Hohn’s Moby Duck.
In Ole Worm’s Museum Wormianum, and maybe in the work of these contemporary collectors too, book-writing seemed as much an act of curation as creation. It felt newly possible as I wandered through histories and photographs about the cabinets of curiosity, and then through the books on my own shelves, that making a collection was less about finding some structure that fit and more about gathering the facts, ideas, and stories that felt right to hold onto and then attending to what I found.
Naturally perhaps, in my own work, artifacts also began to emerge. Soon, map coordinates flanked the beginning and ending essays of that book I had been writing. In the middle of the book, I found myself following the plot of a Jules Verne novel, and then the plot of a dangerous highway, then a highway of mountain cairns, then the fragments of a plane crash on a mountain, and then a series of objects that, after plane crashes, had been lost and found. There were animals, too, not taxidermied, but still displayed, woodcuts of saints, a mathematical formula worked out by dropping wooden balls off the Tower of Pisa, and a formula for the speed of my own friend’s falling.
Sometime into the process of assembling all these essays, I finally worked out that it was a taxonomy of loss I was after, my own collection of disappearing things.
I’d like to say this was the end of it: that I’d found once-and-for-all the “radiant” epiphany that Charles Baxter so forcefully warns short story writers against. The truth, though, rarely walks into the room without complications; some years after discovering the structure for my book, and some years before it was published, I visited another natural history museum. It seemed it would be perfect: much like Worm’s, but this time with ice-related artifacts, and perched only a couple of hours from the glacier where I’d once lived.
I caught a plane, on that trip, from Chicago to Norway, and then took a boat, and a bus up the rocky coastline, then straight inland, several hours towards the museum. Something surprising happened, though. In the middle of the night, just before I arrived, lightning struck the museum I was supposed to visit. Though firefighters were called, and townspeople gathered nearby, nothing could be done. When my bus pulled into the museum parking lot, there was yellow tape and black ash, blowing in the wind, but the museum was gone.
Was this a cautionary tale about the fragile and problematic nature of collections? Was it a warning of the colonizing power of acquiring certain types of knowledge, the way we project our own thoughts and desires onto defenseless objects?  Perhaps it was just an unlucky break for that collection, another ticked item in the long list of disappearances.
I think about this sometimes: Ole Worm and then that burning museum. I think about this and then I look at the one unopened box left in my living room, shoved against a low wall, but still blocking the front door. I know I likely won’t find what I’m looking for there, among the things, but I’ll hold onto them anyway, just in case.

Beth Peterson is the author of the essay collection Dispatches from the End of Ice (Trinity University Press, 2019.) A wilderness guide before she began writing, Beth has an MFA from the University of Wyoming and a PhD in creative writing and literature from the University of Missouri. Her essays have appeared in Fourth Genre, River Teeth, Passages North, Mid-American Review, Terrain.org, The Pinch, and other publications. She lives in Grand Rapids, Michigan where she teaches nonfiction and book editing in Grand Valley State University’s writing program.