2020 Advent Calendar: Nov 29, Ander Monson on Living in the Delay

I write to thee, on the first day of liturgical Advent in the ever-elongating year 2020, of the usefulness of delay. I mean the feeling of being on a plane reading an Albert Goldbarth poem and coming across the title of a strange book in the poem and wondering: is it possible that this is actually a real book? And instead of punching it into google or amazon on my iPhone—because I’d have to pay the $14 for American’s janky wifi—having to, or, I suppose, choosing to stay in that suspended state of possibility for at least a couple hours rather than resolving it.
I mean to tell you that I loved that feeling of indeterminacy. There was a world in which the book mentioned in the poem was a real book, and there was a world in which it was just a poetic invention. I could feel myself existing in both of these two overlaid worlds for just a couple hours and not wanting that betweenness to end. I mean, I did want it to end in the sense that I wanted the answer, and I didn’t want to stay suspended on a plane as I was for another couple hours just to preserve the imaginative possibilities, but I knew that I would miss that feeling once it was gone.
Turns out I miss all kinds of feelings (even the feeling of being on a plane and being annoyed about being on a plane) here in this year, this contingent year. It’s felt like I’ve spent a lot of the year just waiting for something to happen. A lot of things have happened, of course, but I’ve only kind of been part of them. I’ve been feeling like I’ve been on a series of waves, powerless to affect their direction and also unable to really tell when any of them are going to crest, or when all of them are going to crest at once and swamp whatever boat my metaphor wants to be riding on. So it’s been a year for me of hunkering down and of reading, that old school way of overlapping worlds on top of one another.
I didn’t expect to swerve into this, but I was reading Kate Bernheimer’s story “Whitework,” a mysterious, glorious thing. Listening to her talk about it in a conversation when she zoom-visited a class, I didn’t realize that it emerged from an Edgar Allan Poe story, “The Oval Portrait,” that I hadn’t read before. “Whitework” only pulls two things really from the Poe story: Poe’s final line and a line of description that rankled Bernheimer in some way and got stuck in the story she ended up writing around it. I’m not even sure what metaphor to use to describe this process: like pearl and oyster? Match and bonfire? Of course readers and scholars of fairy tales (like Bernheimer) know perfectly well that you’re always rewriting or overwriting somebody, probably better than most of the rest of us do, focused as we are on being original, whatever that means. Or at least when I’m writing something I’m always reading something—there’s always some embedded thing in me, whether or not I realize it, and it only comes out sometimes in recognizable ways. I accidentally used an Arthur C. Clarke line in a story I wrote a while back, and didn’t realize it until way later. It was just there, "mine," with the other stuff in the brain.
I’ve been reading several books about writers reading books, like for instance Fiction Advocate’s Afterwords series, for instance, where we tune into someone as they read a book, typically one I know only by reputation and have no real intention to actually read. Like My Struggle or Blood Meridian, both of which are books I’m going to be honest and say no way am I ever reading, particularly after reading Stephanie Reents’s and Kim Adrian’s fascinating engagements with McCarthy and Knausgaard. The originals are not books I need to spend time with at this point in my life is what I’ve determined. I’ll live in the delay between reading about reading them and actually reading them as long as it takes.

As Will and I started talking about and planning out this year’s advent calendar, I realized how much I missed it last time around. We were otherwise engaged, but I missed it nevertheless. This year I find myself yearning for some ritual, especially with so many others denied to us and having to make do with diminished or altered versions. So I’ve already put up my Christmas lights and erected my monument: 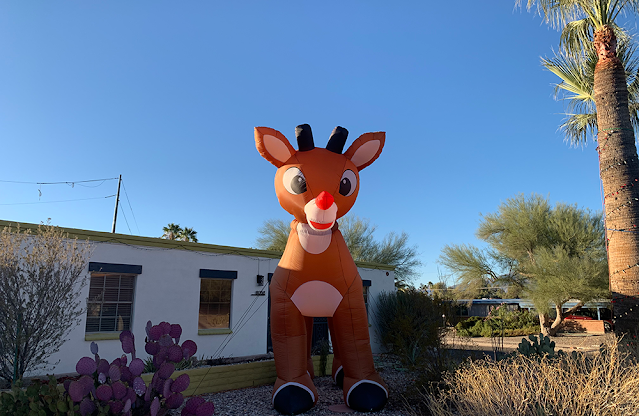 Why wait, I figure? I can indulge myself in the feeling of the season like I normally would, and if it’s hoping that next year is better than the last, I’m optimistic for that too, if only because I do not have the imagination to see how it could be worse.

As I mention every year, I’m not religious but I do love ritual, and the Essay Daily Advent is one of my favorites. It offers us a shared moment to slow—if just a bit—for most of the next month. To enjoy living in the delay. Each day of it we get to read someone reading someone new. We are plunged anew into the intimacies of another’s life. It’s a door we open in the cardboard calendar, and it’s a door we go through into each I you offer us.

Unlike with my own half-assery in which I’m totally not buying nor reading Knausgaard nor Blood Meridian, I do hope you’ll buy and read the work of the writers in our advent calendar, and those whose words our advent writers are leading us to. You should definitely play Outer Wilds, for instance, and read Am I Alone Here? The mask only works if you wear it, I wanted to say, to that dude dangling his mask from his finger in the McDonald’s I stopped at on the way back from Flagstaff, the McDonald’s with the sign on the door requiring masks, and even if wasn’t required, c’mon, man, you’re not alone here, I wanted to tell him: your actions impact others, but I also didn’t really want to get into it with one of these unknowable weirdos either—we do live in Arizona where you can open-carry almost any gun you want without a permit—so I also shut my mouth. Maybe I shouldn't have.

I mean to say the door’s only good if you go through it, and we have 27 of them for you, coming up on Christmas at the end. Whether or not you’re religious or just like the ritual, this is one thing we don’t have to sacrifice this year of delay, contringency, and sacrifice. We can indulge ourselves and gather here together—in this I, in this moment, in this very sentence I hereby gather us—so it is for these reasons I look most forward to this year’s advent calendar which I thus begin.

*
Ander Monson is the founder and one of the editors of Essay Daily.
Posted by Ander at 6:00 AM