The #Midwessay: Katie Jean Shinkle, The Michigan Essay is a Bi-Essay

We're back for round 2 of #Midwessay coverage starting back up this week, in which we re/visit essays and essayists from Midwestern states and those of us still in Midwestern states even if we live elsewhere. In our first round we published one week in each state, and now we're swinging back through to continue. Up this week is Michigan, coordinated by Ander Monson. Are you a Michigander? A Michiganian? Do you have thoughts or feelings about our fair water-bordered state and its literature? If an essay captures the workings of the mind, what is the mind of Michigan? Be in touch and send us something.

The Michigan Essay is a Bi-Essay

I want to speak specifically to the Michigan essay in the genre of #midwessay.

The Michigan essay is a bi-essay.

We are a divided situation, the Michigan essay, in more ways than one, but most ostensibly, two.

The Michigan essay, a subgenre of the Midwest essay as a whole, encompasses a bi-identity in a way that no other state owns in the same way. There is the upper peninsula and lower peninsula, and so the Michigan essay is most certainly one of the bi-axial, the bi-coastal—if we can think of coasts in a limited sense, the third coast, seemingly the best coast, Lake Michigan to Superior to Erie to Huron* and back again, West Michigan to East Michigan or North Michigan to South Michigan, though no one actually says that, they simply say Up North which could be anywhere north of where you are currently and not seemingly beyond to the thing connecting the peninsulas—a powerful and terrifying bridge, the Mighty Mac, the Michigan capitol of bi-identity.

Let’s talk Detroit for twenty seconds: Half of Detroit desperately wants to disconnect itself from the entire state, but oh no no, Detroit, you are part of what makes us great! And terrible! And you are stuck with the bi-identity just as much as the rest of us from the quarter-sized cities (e.g. Grand Rapids? Ranked a measly #113 in largest cities in the US to your far superior (all pun intended) #24 ranking) and the small struggling towns (everywhere else). The Michigan essay couldn’t do it without you, Detroit! Don’t deny us!

The Michigan essay is Say Yes! to Michigan, the slogan from of the 80s shifted to Great Lakes, Great Times, until the 2008 recession hit a monstrous blow, which then shifted to Pure Michigan; a good call since ain’t no good times happening during the recession, and, of course, most fitting since Michigan will always be a kind bi-linearity—will the great times arrive again? Possibly. Let’s not make a sign proclaiming it, though. No promises.

Great Times! The Michigan essay is the essay reminding you to remember the research from CityLab in 2019 where they call Michigan part of the “stuck belt,” meaning their research shows people who are born in Michigan are most likely stay in Michigan for life, continuing to add to the bicipital/bi-cephalous feeling. Sure, the Michigan essay is the one who never left. Born, raised, gonna die. Though, the Michigan essay is also one who has gotten out, who couldn’t wait to leave, never returns, and lies about where they are from. It is also the one who left and returned, even for a moment. It is also one who can’t escape, no matter where they go, no matter how far away they move or travel or reject. It is one, where, once you cruise under the Welcome to Michigan sign, you automatically feel at home, you breathe a little easier, you feel a little lighter. Or maybe you are filled with dread, the darkness deeply housed in your body, a horror show. It is the one where you take in Lake Michigan from the Michigan shoreline sand dunes and you are filled with an enormity you cannot shake, even if you forget it immediately as soon as you look away.

Maybe the Michigan essay loves itself a little too much, or hates itself equally, or hates that it secretly loves itself, but nonetheless has a deep understanding of what it is, where it comes from. The bi-glow of being a Michigan essay is being able to say I’m from fuckin’ Michigan, and being recognized as a certain kind of person, even if the receiver of the information doesn’t quite understand the bi-identity.

The Michigan essay: You are either running from or to. You are ashamed or proud. You will physically fight someone who dismisses or ignores Michigan, who misrepresents Michigan, who misunderstands Michigan, who doesn’t recognize or validate your Michigan-ness. Or fuck Michigan forever. You yearn or you burn—and what is the difference? To be a Michigan essay is to bifurcate. Binary? Nah, you are fluid, even through the either/or. The spectrum exists as spectral. Here you live, even if you think you don’t. Even if you think you are above it. To be haunted by, and tasked with, your life’s work being the Michigan essay, is quite the bi-atch, indeed. 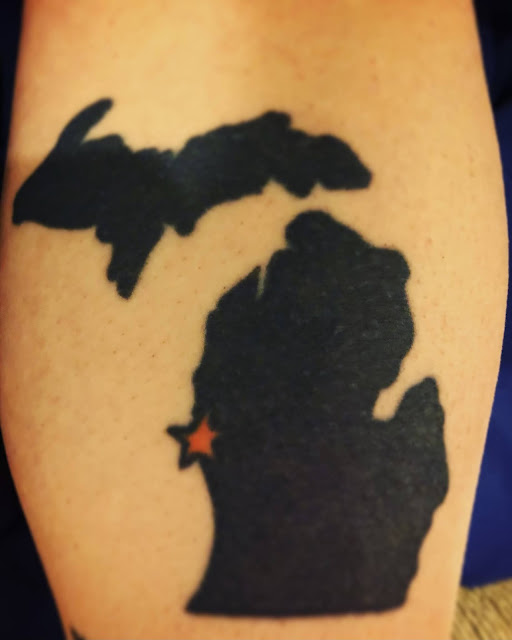 (My Michigan tattoo I got in 2002 because I’m from fuckin’ Michigan that’s why.)
Katie Jean Shinkle is originally from West Michigan. She currently lives in Huntsville, Texas.