I write sometimes in different modes. Like a lot of my stuff begins in Word, like probably yours does too, and while might eventually transition into InDesign it has that Word stain to it. But sometimes they’re initially composed in something else, like Dreamweaver or Write Room, a bare-bones word processor that you can program to look like an IBM PC circa 1990 or a green-screen Apple IIe or whatever that really clicks something on in me when I use it. I mean, you sit down and it all comes from somewhere—I guess you can call it the muse or God or channeling something from beyond, but more often it’s like summoning some past self through a stimulus, and when I write in these other modalities the stakes change. Or maybe it’s not the stakes but the situation I’m composing from: it changes. It looks different. It has unfamiliar tools. The way the sentences sprawl on the page varies. All of a sudden I don’t feel obliged to compose Something Good and instead can get lost in just messing around. It’s obvious, isn’t it: the technology of composition changes so the nature of the composition changes.
Both of the essays of mine that have appeared in the Best American Essays anthologies were originally composed in Dreamweaver, which isn’t a software anyone would ever think to use to compose essays, in part because it pretty much sucks. But I wrote them for my website, so using Dreamweaver, and without thought to what my editor might think of it, and because I was navigating a new space with its new tools, that added an extra emphasis on the actual technologies of composition as I was composing, which I suppose must be a good mode in me, since those two essays qualify as among the bigger hits I’ve had, A-sides for sure, at least by comparison to my usual readership (hey there!), but I certainly didn’t start them as hits at all but began them as weird one-off side projects.
This one’s a weirdo side project too, written originally as part of my forthcoming book Predator: a Memoir, about the 1987 Schwarzenegger movie Predator, but it’s since been stripped out of that, and I don’t know where it belongs now: a b-side, surely. That’s because it’s a little hard to think of it as an essay at all, being that it’s composed in the voice of one of the birds that Olin Sewall Pettingill “observed” in “Observed Acts of Predation on Birds in Northern Lower Michigan,” from The Living Bird Fifteenth Annual, 1976, which I picked up in a Tucson Goodwill largely for the diagrams and got infatuated with.
A lot of the Predator book is thinking about what it means to see (ourselves) as another creature, which is the question that a lot of good sci-fi asks us: what can the predator or bird or whatever see in us that we cannot see in ourselves? We’re not so good at seeing ourselves, which is a disconnect I think about a lot. Well, the Predator, an alien hunter, only sees in infrared, as you know if you’ve watched the movie, and really quite a lot of the movie is spent in its POV as it is (we are) trying to make some sense of these hot hardcore big-gunned supermen wandering through the jungle blowing up stuff and preening. It’s an unusual feeling to be in a film trying to understand just what it is we’re actually seeing when we’re seeing what we’re seeing. I suppose all films are us seeing us (I mean, we literally are seeing us, or some version of us, as we watch the screen), but Predator takes it further. So I wanted to take it further too.
So I started using an infrared camera I bought to replicate this effect. It’s eerie, seeing in these spectra, and knowing that pretty much every creature (including alien predators, if they exist) sees only somewhat like we see, and that they see things we cannot. Jumping spiders see only green and ultraviolet, for instance. Most crustaceans see only blue and red, but a few see way more color than we can. Most insects (and cats) see ultraviolet (which we can’t see) and often blue and yellow. Snakes see some color and some infrared. Birds see substantially more colors than we can, and at a much higher frame rate. The very nature of seeing changes based on what we can and can’t see, and I’m not sure if you’d call what mosquitoes do (see carbon dioxide emissions and sensing body heat, in addition to using their eyes) seeing or if it’s so deformed it turns into something else.
Like the movie itself, my book about the movie has turned into something else the more I watch and think and write about it. There are still a number of first-person experiences as something other than the I you’re reading here (he too is a fiction, I want to note), but none from the bird’s POV, which I decided was a little too disruptive. Plus I started stressing out about the possibility of having to get permission for all the stills I wanted to use from the movie and as a workaround started making my own with the infrared camera I bought so I could see how the creature sees myself. I also happened to have a bird mask, so the image itself is a self-portrait as a sort of bird, rendered in the style of Predator’s best and most enduring effect: 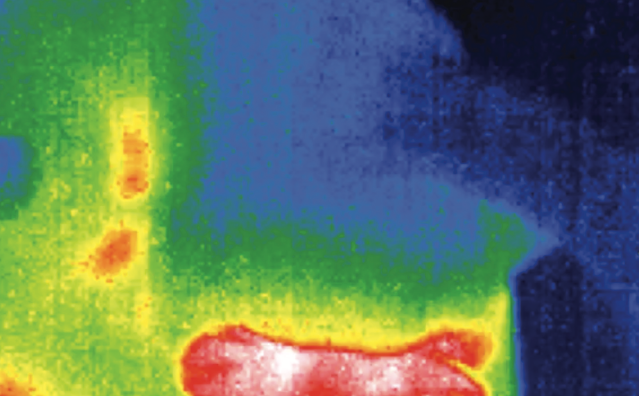 I don’t think any of this is obvious in the essay, and it’s probably not all that important, but I hope it gives you another reason to read the essay and the issue, which is great. On account of the essay itself being a b-side, I guess this makes this, the thing you’re reading, the b-side to the b-side, and it’s longer too and dancier to boot.
*
Ander Monson's next book is Predator: a Memoir (Graywolf, 2022). He's the founder and editor of Essay Daily.
*