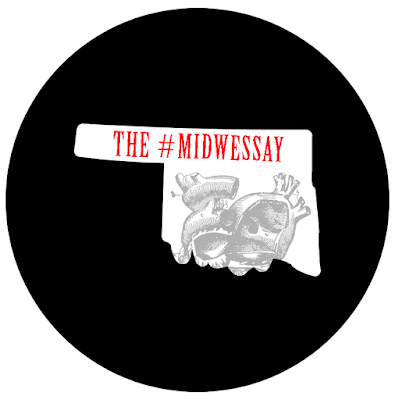 The Great American Desert
Elizabeth J. Wenger
*
I find that I can tell people anything about where I’m from. Lies land easily when your home state makes up a big, blank space in the rest of the country’s imagination.
“Oklahoma?” people exclaim upon hearing my origins, tasting the word in their mouth like a soured fish. In their heads, they picture a generic state border, something square or rhomboid, and try to reach back to US history class. They’ll remember something loosely about Indians, maybe something about oil…wasn’t there a musical?
“What’s down there anyway?” they’ll ask.
“Oklahoma is a lot like Australia,” I’ll lie. “In isolation, we’ve developed unique flora and fauna. We have a rare kind of wolf that’s blind in one eye so it walks crooked, with the good eye facing out.”
They’ll nod their head, happy to accept the story. They’ll go home and tell their friends: “Did you know that Oklahoma has one-eyed wolves?”
And why not?
I’m from nowhere which means I could be from anywhere. My part of the country was founded on myth, so I don’t find it troubling to perpetuate such tall-tales.
*
There are many myths of the west, but of the middle-west there is one in particular I’m stuck on: the tale of the Great American Desert. Founded on accounts from Zebulon Pike and Stephen H. Long, two explorers who each summarily wrote off a huge chunk of America’s center as uninhabitable wasteland. Pike compared this part of the country to the sands of the Sahara. Across the tract we now know as the high plains, Stephen H. Long wrote in large letters, “THE GREAT AMERICAN DESERT.”
Now, that word “desert” just calls to mind vast stretches of sandy land. But at its core, it is about desertion. It comes from the late Latin desertum, literally ‘a thing abandoned.’ I see this myth—now long denounced—that wrote off a wide, diverse region with the word ‘desert,’ as a foreshadowing, and a bit of historical metonymy.
*
My state’s history is bound up in the idea that nothing is or was here—or at least that whatever was here was up for grabs.
Oklahoma was, in fact, already inhabited land. Even when Long deemed a vast portion of the midwest and west a desert in 1830, the lands of my state were home to the Wichita, Apache, Quapaw, and Caddo tribes.
Then, when Andrew Jackson sent many of the Eastern tribes on that long tragic trail, with treaties and contracts, they were left, people and promises abandoned, in my state, a state my friends are always leaving, a state I myself have left.
*
As a writer from an imaginary nowhere, I find myself less a storyteller and more a record keeper. With everything I write, I am populating the reader’s imagination. Filling the great desert with all the people that are already there.
Oklahoma's panhandle is often called “No Man’s Land.” Out there, dust devils spin like dancers across the infinite stage of highway. The state’s Western lands shift to mesas and ragid escarpments, like some grand excavation God left midway through.
Today, I flip through images of Oklahoma Ghost Towns and think about abandonment. I feel shame for the home abandoned (by me, I tsk myself in guilty self-importance). It is a shame I feel most when speaking to people who’ve never been to my home. I find myself denying, deriding, and defending it all at once. My state contains multitudes, all layered up like the ground itself and I am always trying to dig up a few artifacts to prove it exists, and that its existence is more than grains of sand.
Perhaps that is why I still write about home and the people who live there. Still write to keep the place vivid, full, brimming with life.
No desert, never a desert.
Born and raised in Tulsa, Oklahoma, Elizabeth Wenger currently lives in Chicago where she is serving as an Avodah Jewish Service Corps member at a food pantry. In her free time she writes about Oklahoma arts, culture, and policy.
Ancient mountains (now hills), ancient ocean beds (now plains and prairie), tornado alley, tablelands, highlands, cross timbers, caves, the Ozarks, cypress swamps and forest—we've got it all in Oklahoma, baby. This place favors writing about landscape—it's embedded in us in a way I suppose other writers feel. For me, why I write about Oklahoma, why I care about its history and future, the legacies it will and won't claim, has something to do with the sight of a flat blooming canola field straddling a wet red dirt road beneath striated grey and white clouds after a spring storm. And, that this place has been and is filled with a mix of people—displaced, wandering, outcasts who are still often overlooked. The late Barry Lopez (RIP; not an Oklahoman) wrote, "If we could speak more accurately, more evocatively, more familiarly, about the physical places we occupy, perhaps we could speak more penetratingly, more insightfully, more compassionately about the flaws in these various systems which, we regularly assert, we wish to address and make better." Each of the Oklahoma writers for this series speak to the physical place well, and each asks us to consider what that place (and its people) has to offer, or not. —Liz Blood, Oklahoma Coordinator