Advent 2021, Dec 21 Patrick Madden: On a Pleasing Encounter without a Pickpocket

after Louise Imogen Guiney's "On a Pleasing Encounter with a Pickpocket"

"It struck me that the sweet symmetry of the thing ought not to be spoiled; that I was serving a new use and approximating a new experience; that it would be a stroke of genius, in short, almost equal to the king pickpocket's own, to make love to the inevitable." 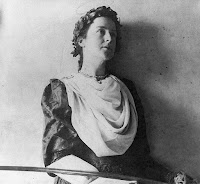 This essay is a cover in the prewriting primarily, in the doing more than in the reporting. In other words, I may not talk the talk, but I did walk the walk. (Yes, I am happy with this slight inversion of the cliched phrase, but not proud. I'm sure this particular reversal has been done before ["Woo hoo hoo!" sing the Barenaked Ladies in their song attesting to this truth, and I always imagine them performing on Jay Leno's Tonight Show, with David Duchovny accompanying on a shaker-egg (more or less) in time and singing along]. But perhaps a pilgrimage to that "lonely street corner [still] not adorned by a gas-lamp" is a thing unique in the footnotes of the annals of literary history.

An explanation is in order. I was attending the AWP Conference (weren't we all?) in Boston in March of 2013 (a month before the Marathon bombings, as it turned out, and in the same vicinity). The Hynes Convention Center where it was held was only a few blocks away from the corner immortalized in Louise Imogen Guiney's lamentably unknown essay "On a Pleasing Encounter with a Pickpocket." I knew this not from the essay itself, which is appropriately vague about its exact location, but from a letter the author wrote the day after the fateful titular event (which, felicitously, occurred exactly 129 years before today, on December 21, 1892). There, writing to her friend Sonny Day, whom she owed money (which she could no longer repay, now that she'd been robbed), she pinpoints the location as "Berkeley St at the corner of Chandler St, between the grain elevator and the vacant lots."

I was off, in the keen winter air, toward who knew what, but with a fire of enthusiasm for the comewhatmay. Not a block from the center, striding confidently off a curb, I stepped in a mound of what I thought was snow, and found myself shin-deep in slush, liquid freeze slurping over the edge of my boot and sliding in, soaking my sock. "Propitious!" I thought, and kept on marching toward destiny.

Twenty-odd minutes of purposeful striding, with appropriate pauses for automobiles and zigs and zags for subsequent mounds, and I had arrived. Five-story buildings met the sidewalk on each corner, to my right a smattering of street-level shops, to my left nondescript walls of stone and glass. No granary, no vacant lots, no "coal-sheds and broken tins" anywhere in sight. Nor any people. Nonetheless, I strategically placed a dollar in my left jacket pocket. I crossed on the WALK light. Wandered around, waiting for someone, anyone. There was no one. It was too cold. Perhaps too early. I would not be pickpocketed today.

Unless...I tugged at the dollar (yes, it occurred to me that I was being far too cheap in my experiment, but the budget for essays had recently been cut), pulling it half out of my pocket. If no "tiger-lily of the genus 'tough'" were available to help me fulfil my mission, perhaps the whipping wind would. I peeked out from the shelter of a windward edifice and stepped into the gusts.

Really!? I'm subjecting myself to this suffering so I can say that the wind took my dollar? And of course, it didn't, either. The bill remained firmly in the pocket, delicately stirring but unremoved by the buffetings. I want to say that I was always self-aware enough to laugh at the ridiculousness of my quest, but especially once, in the absence of the possibility of a "real" pickpocketing, I turned mystical. I mean, how would I have written that? And what was this whole enterprise, anyway? Homage to a beloved essayist? Essayistic thrill-seeking? A record of my contemporaneous sensations? I had begun the day expecting something to work out, as it always does, creditable or the reverse, and if "nothing had happened" as yet, perhaps it would. Or it wouldn't. I suspected that the answer to this dilemma lay not so much in the external world, but in my openness to it, my perceptiveness and willingness to understand and to connect. I might trust, still, that something would become clear, or that I would make things clear. That things would work out. That the universe would provide.

To the vacant air I sang out my silliness, then decided to return the way I had come.

All the way I walked (squish, step, squish, step; my left foot still wet and cold) with the abstracted Marcus Aurelius Antoninus, whom I knew only in the vaguest sense, but whom I expected might have some wisdom for me were I to consult him. I have done so now, at long last, with the help of an interpreter, George Long:

"To be vexed at anything which happens is a separation of ourselves from nature." (II.16)

"Do the things external which fall upon thee distract thee? Give thyself time to learn something new and good, and cease to be whirled around." (II.7)

"Of human life the time is a point, and the substance is in a flux, and the perception dull, and the composition of the whole body subject to putrefaction, and the soul a whirl, and fortune hard to divine, and fame a thing devoid of judgment." (II.17)

"Either it is a well-arranged universe or a chaos huddled together, but still a universe." (IV.27)

That afternoon, I attended conference panels asserting the importance of essays that essay, celebrating essays that flash (into, out of, around existence), that think on themselves self-referentially. Other than my still-soaked sock and shriveled toes, there was no record, were no lasting effects from my excursion. The thousands of people milling about me were completely unaffected by my pilgrimage. No matter.

"Everything harmonizes with me, which is harmonious to thee, O Universe." (IV.23)

Later that evening, on my way to who remembers where, I gave the dollar to a stranger singing in the cold on another street corner, less lonely, quite adorned (still no gas lamp). The next day, upon retrieving a bag of chips from a vending machine and scooping up my change, I discovered four quarters too many. When I returned to my office the next Monday I found, pinned to the cork board outside my door, a crumpled dollar bill.

Posted by Patrick Madden at 4:00 AM