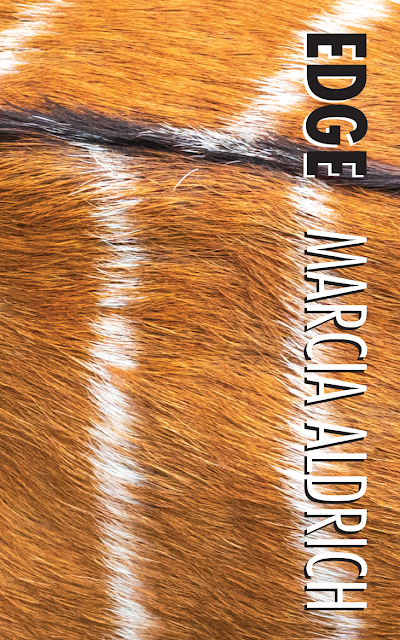 (Edge is out Feb 8 from New Michigan Press)

It’s awkward to speak of one’s own work. We want to believe an artist’s work should speak for itself. When I received my copy of Edge and sat down to read it through, I was surprised by the physical intensity of my response. I was shaking, shivering, and shot through with some kind of vibration that resists a neat definition. It was physical, that’s for sure, but emotional too. Euphoric. Cathartic. The vibrations encompassed my whole self, the whole system that makes up who I am as a person and a writer. I have no idea if anyone else will feel the way I do reading Edge. That’s the writer’s dilemma, isn’t it? As a writer I have to go my own way, write what it is my lot to write, and hope that what I communicate speaks to others. I suspect if anyone responds to Edge it will not be the way readers follow a narrative. They will be responding to the lyric intensity, the lack of masks, the voice, the way certain images walk out of their frames. The painter Edward S. Casey has remarked that “the edges of a painting act not to close off but to open up possibilities for the emerging image.” So too, the essays in Edge while discrete have edges that open up the possibilities of amplification. In the writing of Edge I can’t name a particular work that has influenced its composition. It feels as if Edge has emerged from a lifetime of reading, especially modern poetry, especially William Carlos Williams’s long poem Paterson. Edge is my ode to Michigan.

This is a way in.

I grew up in Pennsylvania. Born in Allentown and until the age of seven I lived in a white house with black shutters smack-dab in the middle of the block on 22nd street. It was not a wild place but there were fields nearby on the outer edges that had not yet been turned into subdivisions. My mother was a believer in turning me out as early as she could. She was not troubled by the troubles I might find or make. As a consequence I don’t carry powerful memories of the house itself on 22nd street. I don’t have rich memories of my room, for example, or the kitchen. I was more attuned to what I might find in the alleys running between streets, to the fields backing up behind the neighborhood houses and the river at the bottom of the hill. It was in one such field that I found my sister’s cat caught in a trap where I heard him crying and brought him home where unfortunately he died. Rescued but not saved. That phrase might describe my early experiences. I was always trying to save an injured bird or animal and mostly failing, learning the limitations of my human interventions. I remember the trap better than I remember the dolls I was given. Metal with teeth. Ghastly lying deep in the tall grasses. I almost stepped on it. What I didn’t know then and don’t know now is why there were animal traps in the fields by the river. Who set them and what were they trying to catch and to what purpose. I didn’t have answers but that experience was the beginning of my story when I was awakened to what I’ll call the contact zones that clash between animals and human beings and ideas about who has the right to the land that they both inhabit. Human beings have the upper hand and this was my first encounter with that dark truth. Now I’m amazed that as a girl of six I stepped out of my zone to pry open the trap and release the cat.

Not long after when my older sisters went off to college we moved to a place strangely called East Texas, about twenty minutes outside Allentown where the Little Lehigh River ran through fields of corn, wheat, and soy beans and dilapidated farms, once brightly painted red and now faded, anchored the corners of rambling roads. My parents bought ten acres with a house sitting on the crest of a hill that overlooked the curving river below and was banked on both sides by woods. During the time I lived there, the land around us remained undeveloped. There were threats of a highway being put in behind our house but it never happened. If there’s any place I should feel connected to this is it because that’s where I grew up, where I kicked around largely by myself, accompanied by my dogs. That’s the river I skated on in winter and fell through the ice trying to save a trapped dog, the roads I rode my bike along, the woods I scrambled through on my way to my neighbors. Again it was not the house that called me or made me think home, it was everything around the house and the life lived outside, what might be called home range that anchored me. The mundane life of my parents struck me as almost alien. My mother often called me in at the end of the day and I would not come, at least not at first. I would step back behind a screen of trees or stoop in the high growing wheat at the top of the hill and watch my mother and father go about their nightly routines. I lived in the spaces between the life of the house and the life of the fields and woods, a back and forth that has shaped me.

Much later, after graduate school and marriage, I took a job teaching at Michigan State University and moved to East Lansing, a town built of neighborhoods bounding the large sprawling university. There was the town and the university and the contact zones between them. We bought a modest house on Orchard Street named for the orchard that had once existed in the town’s history but was now erased. From our house on Orchard I could walk to campus and my children could walk to elementary, middle, and high school. Everything was walkable on tree-lined streets with broad sidewalks. From our house I could smell what was cooking in our neighbors’ houses, hear their arguments when the windows were open. Close-knit is what I’d call it. Heavy on human presence, low on privacy.

And then later still, when our children went off to college, I couldn’t wait to get away from the domesticated town of East Lansing and we moved to Tacoma Hills in Okemos, a place that once again resembled the move my parents had made from Allentown to East Texas. We named our house in Tacoma Hills Riverhouse because it sat up on a hill overlooking the Red Cedar River. Once again woods bordered both sides of our property. It was as if an invisible hand was leading me back to a place I might call home. Homecoming, however, was complicated for I was no longer a child standing at the edges, I was a home owner, implicated in the damage we do to the natural world and the animals in it. In my name fences were built to keep out unwanted animals and mark ownership. In my name roads with high density traffic plowed through old farmlands, displacing the animals and driving them into unsafe territory. I also rediscovered my identification with that animal world, specifically the deer who shared a home range with me. The writing in Edge emerged out of that kinship. Living on the Red Cedar River in Michigan I became reacquainted with myself as someone who wanted to rescue and save but largely failed. My husband recently asked me if the local officials in charge of reducing the deer population I write about in the essay called “Edge” would have been swayed if I gave them a copy of Edge. The answer would be no. Sadly they would not understand what it means to say “That is the deer I know.”

*
Marcia Aldrich is the author of the free memoir Girl Rearing, published by W.W. Norton, and of Companion to an Untold Story, which won the AWP Award in Creative Nonfiction. She is the editor of Waveform: Twenty-First- Century Essays by Women, published by the University of Georgia Press.
Posted by Ander at 6:00 AM