on Design and Ninth Letter and April Freely

Ninth Letter is a journal you should know both for its design and its content, though the design is what speaks to you first. The work they publish is almost always interesting, but the way they publish it is what separates them from most other contemporary litmags. Example: a few years ago they accepted an essay of mine that talked about defunct and dying technologies. They printed it on fricking microfilm and tucked it in a pocket in the issue. While the effect of the design choice here was to formally reinforce one of the through-lines in the essay, the secondary effect was to render it unreadable unless you had access (as most of us do via library) to a microfiche machine. They also helpfully posted a pdf of it on their website (which you can download here--though the way to experience the actual essay, which is to say the way you are forced to perform the essay, to collaborate with the writer in order to read it at all, which may or may not be worth the trouble, is via the microfiche version).

The way they use design varies pretty substantially from piece to piece, and designer to designer, and I'm sure that each of their designers thinks about the function of design differently.

To the new issue, though: two essays deserve some of our time. Stephan Clark's "My Year of European Underwear" is hilarious and worth the read, though if you're squeamish about testicle-related trauma you may want to skip it (but I hope you won't, since it's worth the ride). That's not the one I'm talking about here. Like the essay, its design is pretty straightforward.

Another, "Real Men Don't Cry," by Sarah Klenbort, is almost unreadable (and not in a constructive or interesting way) through its design. Klenbort's essay takes what seems at first like a fairly tired idea, that of gender stereotypes and idealizations, and the double standard pretty much all of us apply with regard to gender, though some of us try to work against that. It's 23 segments (cool), each a strand in the braid of the essay (cool). Some are facts about the incidence of violence (both the acceptable kind--football, say--and the unacceptable kind--murder, say, or dogfighting) in Western culture. Some are more personal, as you'd expect. The literary history it brings to the table is its best note, talking Shakespeare and Titus Andronicus and Coriolanus and working the essay into an argument that is actually fairly surprising in the end.

But the design here is tough to take. The essay's segments are numbered to begin with, so the decision to assign different fonts (at least four different fonts are deployed in this essay, maybe more, some serif, some not), italics, small caps, changing font sizes, all caps, bold, underlining--all of this what we would refer to in my grad school workshops as typographical trickery (sometimes as "cheating," which always struck me as bogus)--is herein bogus. I suppose the idea behind this was to render each individual strand more obviously in the greater whole of the essay.

Which is entirely unnecessary. The reader is smart enough to tell "3. The average American child watches 200,000 acts of violence and 1,600 murders on television by the age of eighteen" from "7. When I was six months pregnant..." without having to render the first as all-small caps, underlined, in a smaller, sans serif font (whereas 7 is rendered in more traditional prose typography). It doesn't add anything at all. Worse, it condescends and obscures.

Let me be clear: I'm all for writers using the tools at their disposal (design, desktop publishing, those buttons in the corner of the Microsoft Word screen, etc.) to make meaning more elegant, beautiful, violent, interesting, or clear.

Yet the familiar objection to using typography to signify something as simple as denoting who's speaking, or someone shouting, or whatever is valid because ideally we're using design to achieve an effect because it is the simplest, most elegant, best way to meaning, not because it's the easiest way, even if it's kind of clunky and obtrusive, and maybe we could do it better via the craft of our sentences. (And let's admit it: we all need to work on our sentences.)

And there is certainly a value in limiting the ability of writers to deploy the tools of typography to turn in a beautifully-designed and typeset page that mimics the look and authority of the printed page, thus copping a faux authority that can short-circuit some of our abilities to read the words and not just how the words look. We want to be able to tear each others' work up if we can, to tear our own work up, so we don't settle for the draft that looked pretty on the page in that sweet new font we're in love with.

But the design of Klenbort's essay serves nothing, and certainly not the writer's words. At first glance it looks cool and complicated from a typographical standpoint (though those two things are not always equivalent), but in reading, it serves to flatten the tonal shifts from one strand to another, to make things obvious, so obvious for the reader. This reader reads it as pandering, and it made me much more likely to take issue with Klenbort's prose which, like her argument, is actually pretty good when you're not bitching about the design (which is almost impossible for me to do).

On the flipside, April Freely's essay ("Garden Valley") supplement to the issue (the issue has three separately-bound and -packaged supplements) is a lovely example of an effective and subdued design that flatters the essay. Freely's essay is laid out landscape on the page in two columns. Text runs concurrently down the pages which are all attached, accordion-style, so that you could stretch the whole thing out on a wall and just read down, scroll-style. This buttresses the natural design of the actual writing (provided that this was how the essay was written, which I have to imagine must have been the case) and strips almost everything else away. The essay is typeset in a small serif font (same font), left column right-justified and right column left-justified, with a stroke down the middle to separate the two. 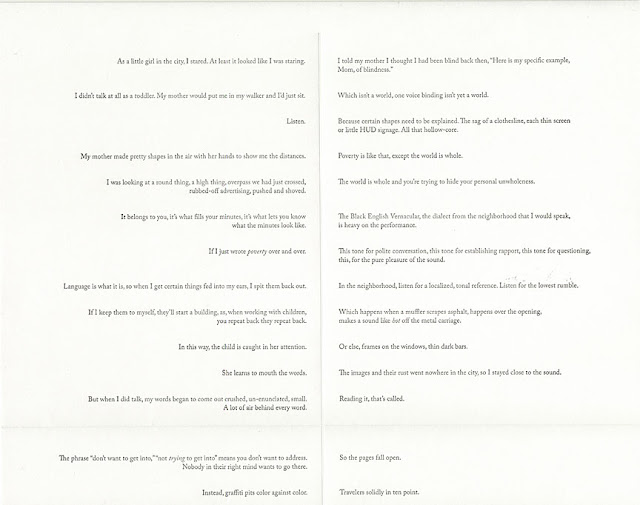 The essay is occasionally oblique, elliptical; it's not totally clear how you're meant to read it (like a regular page, left to right, then start left again? or a few lines left then a few lines right). I don't mind that kind of thing. There are a number of places where we get some nice crossovers, which is what you'd want out of a piece like this, though they don't always connect obviously, which creates an unbalancing effect which I find frustrating, but not so much that it takes me out of the essay. It's about the space between black english vernacular and "correct english" as well as the space/divide between oral and written, between at least two different kinds of spaces and within those space ("I mean I can feel the space between each syllable" ... "The words were separable and this was essential"). Obviously the essay goes pretty poetic, since it's mostly paired (or not) strophes rather than paragraphs. And it breaks up in places and is generally quite lovely and lyric and formal.

The enclosing folder is doing something else, maybe connecting to one of the other supplements. I'm not totally sure about that yet, but it's not particularly distracting.

And one of the luxe features (Ninth Letter loves its luxe features) of this design is that the essay is letterpressed. Black on white, yes. The stroke down the center isn't printed with ink; it's just blank but imprinted. Also a nice touch. And the letterpress suggests the divide between oral and print even more dramatically, the space between these authorities. It also looks (and feels) cool. Here the design serves writing, serves meaning, which is what design ought to do, whether it's in the hands of designers or writers.
Posted by Ander at 9:59 PM