On 12/21/19, we invited writers and readers to write about "What Happened" that day, however they interpreted it, as an exercise in mass attention, and promised to publish as many of the resulting essays as possible. So here we go! For more details and a full list of the contributors, click the What Happened page.

I wake early, 6: 15 a.m., thinking of my father’s mother. For more than fifty years, she boiled down each of her days into a few staccato words that she recorded in yearly planners bound in brown leather.

When I was a young teenager, I came upon the planners in the bottom two drawers of a large dresser, located in what she called the “back room” of her ranch house. I quickly closed the door and knelt in front of the dresser, my hands sliding anxiously over what I thought was sure to be a treasure trove of words from a woman I loved immensely but knew only as a grandmother. Which is to say, I hardly knew her and wanted even more to feed my fantastical love. As the day turned dark, I poured over my grandmother’s books, looking for portals into her interior life. Already dreaming of being a writer, I was convinced this is where the good material must lie.

I pulled out the year 1970 to see what she might have mentioned about my sister and me in the year we were born and adopted into our family. August 1970. Maybe: “Twins home.”  Maybe: “Met the babies for the first time.” Maybe: “I love them so much it hurts.”

For a moment, in my youthful disappointment, I actually wondered if my grandmother’s life had robbed her of her soul, if she had simply become a body of “gas in car” and “trailer cleaned” and “Larry to school.”

Maybe she mistakenly assumed that nobody cared. (I cared.)

Or maybe, at the end of the day, she simply had nothing left to say other than what was meant to be said.

By 12 noon on December 21, 2019, I’m living my own best external life: “drove to Shoprite for diced tomatoes,” “scrubbed bathroom sink,” “pulled party trays from storage,” “set out clothes for boys,” “ran four miles.” I like a good To-Do list, and I like ticking off the tasks. My To-Do lists are mostly in active tense. My grandmother recorded hers primarily in passive. Perhaps that’s the difference between getting on with it and looking back on it. “It’s a great life if you don’t weaken,” she used to say, though she never wrote it down.

The thing is, I’m happy in my lists, and with being a mother of four sons. When it’s not December 21, I’m also a professor, and I’m happy in those lists, too. That’s not what this is about.

And yet by mid-afternoon—I’ve lost track of the time—I’ve showered and slipped on a short, shimmery blue dress that I last wore to a Roaring Twenties birthday party, five years ago. I pull a curling iron from the back shelf of the bedroom closet and hide in the bathroom, putting a few ringlets in my hair. I’ve had this same curling iron since high school, and I’m embarrassed to be using it at my age. I rarely do, maybe once every year or two. It feels vain. I don’t want my boys to know I’m doing this. I just want to walk out of that bathroom as if pretty settled itself on me pure.

And just like that, I’m off the radar, thinking, Well, now, isn’t that a goddamned privilege,
to live a life that you can tell people about, to pull your details from the shadows, or even from the light, and make art of them? Must be nice to walk the dog and have it simply mean “walk the dog.” Or, to actually walk the dog. Or the cat. Or whatever else needs to stretch its legs and gulp the air in order to feel alive.

I am alive, though one eye is on the clock.

By 6:30 p.m., thirty minutes before the guests are set to arrive, I’ve hauled myself back onto the grid with “party food prep,” filling mushroom caps with cheese for my husband’s annual Christmas party and cutting tomato pie into small squares.

Around 8 p.m. I’m sitting with a friend on our green leather sofa, its own kind of book, in the living room of my house, the party whirling around us. The familiar panic had risen in my chest as I “set out cheese and crackers,” “served drinks,” “made small talk.” My friend catches me up on her extended family, and I use her words as a focal point, trying to walk a straight line toward them without tumbling over, even though I’ve had nothing to drink. At one point, I am tempted to crack myself open between the lines and spill a little of my deep despair onto her pale hands resting in her lap. But I don’t. Some things just can’t, or shouldn’t, or won’t be said.

We “continue party” until 10 p.m. when I leave to drive home a kid who belongs to my thirteen-year-old son. My son goes, too, of course, and they joke and sing and make me laugh.

By 11 p.m., the little boys are so past their bedtime that they are tipping into the irrational, and I “Merry Christmas” the stragglers, still putting on their coats in the foyer, as they have been doing for the last hour. I change back into my running clothes, which I sleep in regularly because I am also running in my sleep, and I lie down next to the baby. He snuggles his head under my arm and his static blonde wisps tickle my nose. He tells me in an angry whisper that he loves me more than I love him, and I don’t argue this one time because it will just make him madder and he needs to sleep. But I do love him more. I love them all more. I love them all so much it hurts. “Boys to bed.”

Just after midnight, or before, or maybe nowhere near midnight at all, I pull myself from the baby’s covers and turn out the hall light. I hear my husband clanking clean-up in the kitchen. I don’t say goodnight. I am out of words for the day, maybe the month and years, too. Instead, I disappear off the page until the next morning.

Jenny Spinner is an associate professor of English at Saint Joseph’s University in Philadelphia where she teaches writing and journalism.

I teach high school for a living these days, and so December 21st almost always occupies a liminal holiday space--done with school, haven't yet headed out to visit the family in my rural Texas hometown (but Texas is certainly on the mind, especially given that each year my ability and/or willingness to play "straight" diminishes), too early to start prepping for New Year's Eve, all in all a kind of space & a kind of time devoid of major structural identifiers. Who am I? Where am I? What am I? Why am I?  Doesn't matter, it's break--enjoy it!

My experience of this day is dominated by two games: White Elephant Gift Exchange (organized by a friend/co-worker at her house, conveniently an 8 minute walk from where I live; a daytime party full of friends, co-workers, acquaintances, people I have never seen before, vaguely familiar friend-of-friend-of-friends, people I have met like 6 times but who do not remember my name (or vice versa)) and Disco Elysium (a reading-heavy video game, sort of a cross between an old-school cRPG and a point-and-click adventure, in which I have been playing a washed up alcoholic noir detective, except through the role-play decisions made available to me by the game I have also chosen to make my noir detective both a screaming, hardcore communist & the harbinger of a Lynchian apocalypse; incidentally, I am deciding now, as I type this, that Disco Elysium is the Very Official Essay Daily Game of the Year for 2019, an award we have never issued before and will likely never issue again).

In lieu of attempting to narrate how each of these games went, I will instead provide a sort of inventory:

Items Permanently Gained in White Elephant Gift Exchange;
--one 32-variety-pack of Korean sheet masks, designed to hydrate the face and to provide it with collagen. I have used this brand before, and am glad to be able to claim it (the ones labelled "horse oil" and "snail" are my favorite, though I do not much appreciate "olive" and "wine").

Items Gained in Disco Elysium:
--one bullet (my commie-apocalypse-noir detective will never actually fire it).
--a trackwear jacket which looks terrible but somehow increases my detective's pain tolerance stat.
--this screenshot, which I took late that night for reasons I did not totally recall the next day: 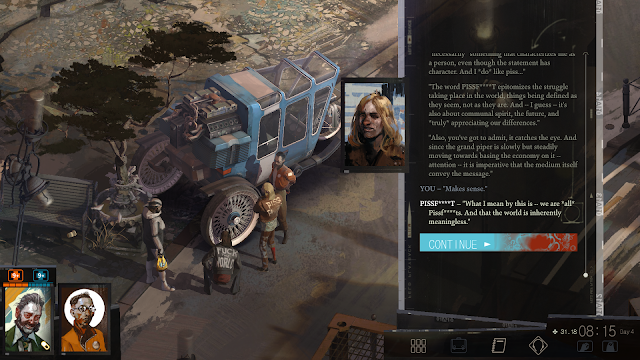 We're happy to publish any other What Happened Contributions you may have banging around in your drafts--find Will's email over on the right if you're so inclined.
Posted by Will Slattery at 5:30 AM