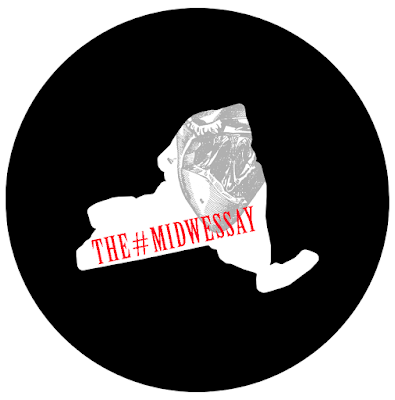 Transitive, NY
Stephen J. West
*
If I had a long weekend in my early twenties, then I would drive the six-ish hours to New York City to visit my friend who had moved there after college to chase a career in the art world, which meant a part-time job as an assistant to an artist: answering phone calls, organizing calendars, carrying heavy shit around. In terms of proximity to the art world, my friend was artist-adjacent. I wanted that life.
If I met people while hanging out in the city, then they would ask where I was from.
If I answered Upstate, real cool like, then they’d respond, White Plains?
If I responded no, then I’d get the first of a series of head tilts.
If being in NYC and hanging out in a studio jammed with people who carried heavy things for artists and recording bad music on Garageband and pissing on canvases and dreaming of a new Warholian factory scene that I was participating in didn’t make me a part of the art world, then I hoped it at least made me artist-adjacent.
Wait, you said Upstate. Like… Albany?
No. further. Western. Rochester area.
That’s not upstate. That’s… Minnesota, then, inevitably, after squinty suspicion of my actual New Yorkness, I’d admit, like a burnt offering to the jealous god of cultural relevance, I am from Livonia, a town of corn fields and manure smells in Livingston County about 30 miles south of Rochester, NY.
If the conversation concluded with I thought Livonia was in Michigan, then I might as well be from any place other than New York.
If I was not a New Yorker, then I couldn’t be artist-adjacent. It didn’t matter that I was into Dada.
If I abandoned the idea of moving to NYC to be artist-adjacent, then I might consider doing something that felt like the opposite… like a PhD program in the Midwest.
If I think of the Midwest, then I think of Iowa.
If I think of Iowa, then I think of the painting American Gothic by Grant Wood. Grant Wood explains how he found his signature style that defined American Regionalism in a way that feels too real: “I found the answer when I joined a school of painters in Paris who called themselves neo-meditationists. They believed an artist had to wait for inspiration, very quietly, and they did most of their waiting at the Dome or the Rotonde, with brandy. It was then that I realized that all the really good ideas I'd ever had came to me while I was milking a cow in Iowa.”
If I went to graduate school in Iowa, then I took an intensive summer course on the everyday places and spaces of Dublin in James Joyce’s Ulysses.
If I didn’t drop that course like a bad tinder date, then I read Michel DeCerteau.
If De Certeau argues in The Practice of Everyday Life that place is "an instantaneous configuration of positions,” a “locatedness” that “implies an indication of stability,” then two things cannot occupy the same place at the same time.
If my Joyce professor asked me after reading DeCerteau, where are you from? Then I’d have to say I don’t know.
If people I met in Iowa City (actual Iowans—like people from Iowa) interrobanged, You’re from New York?! Wow, the big city! This must feel SO different, then I might try to explain I’m from Western New York—actually, the Midwestern part of the state.
If they felt I was misrepresenting New York, then I would remind them how many people think Iowa, Idaho, and Ohio are interchangeable.
If geography is interchangeable, then Western New York is as Midwestern as a Grant Wood painting. “Western New York” might as well be one of Wood’s series, where canvas after canvas depicts patchwork fields stitched into a quintessential pastoral quilt between two Great Lakes, where green tractors drive along county roads lined with barbed wire and disproportionately white bodies move among decaying barns that cling to the earth like cicada husks.
If De Certeau defines space as a "practiced place,” equivalent to context shaping the meaning of a word when it is spoken, “that is, when it is caught in the ambiguity of an actualization, transformed into a term dependent upon many different conventions," then spaces are determined by historical subjects, by the users of places, speaking the words of their experience into stories we tell about places and our relationships to them, a “labor that constantly transforms places into spaces or spaces into places.”
If the stories we tell ourselves and each other transform places into spaces, then the University of Iowa is in Idaho City, Ohio, according to the t-shirt I wish I bought there but didn’t.
If Iowa City is the Paris of the Midwest, then the Foxhead is the Rotonde.
If I went to the Foxhead then I was artist-adjacent in Iowa.
If I was artist-adjacent in Iowa, then Iowa is my NY.
If Iowa is my NY, then my New York is Midwestern.
If my New York is Midwestern, then this is me milking a cow.
Stephen J. West’s essays have appeared in Brevity, PANK, and Zone 3, among others, and his artist’s book DIY View-Master: Intimate Space was published as a special edition by Ninth Letter. He lives and creates in (Mid)Western New York and teaches at St. John Fisher College.