I remember that iris, a dome of florets now more gray than blue, not solid but patterned, with bits of white breaking through the way light spills from the bottom slit of a closed door. Back then, we spent hours holding each other’s gaze, locked in study and reassurance: I’m here. You’re here. Once, while changing him in an airport bathroom—he was about six months old—a woman leaned in, interrupting us. She put a wrinkled hand on my arm, and said, “I remember that, too. Don’t blink.”

But I did blink, inevitably, and now he’s more man than boy, elbows propped on an aluminum-topped table, sweatshirt sleeves pushed back, popping small balls of falafel into his mouth. He brought me here because he knew I’d love it—your kind of food, Mom—and I realize he finally knows me the way I know my own mother. Which means he knows only what he can bear to know. We’re at a hole-in-the-wall falafel joint tucked into a covered alley off a busy street in Wasat al-Balad. He orders foul and hummus and mouttabal. Someone slaps two round discs of bread on the table. There’s no menu, but my firstborn knows what he’s doing.

In the last few days, we’ve shared more words than we have since he was a child. He tells me about his visit to Palestine, the differences between Moroccan and Iraqi dialects, the Circassians who guard the royal family, and that time he inadvertently walked into the quiet room in the library and forty pairs of eyes lifted to stare at him, not hostile, just looking. When the man at the market across from the university gate asks why he is studying Arabic, he says “because I love the culture” not “politics.” He leads me inside: When the fruit comes out, it’s time to leave. Women sit in the back of the cab, not the front. We talk about the crazy traffic in Amman and the constant honking, and then he remembers that time he drove home to Philadelphia from the shore and a violent thunderstorm flooded the roads and he couldn’t see at all and he was terrified. He’d only had his license for six weeks, and he didn’t want to be in charge anymore. He wanted to give it all back, but he couldn’t, so he pulled into a mall parking lot to wait it out, only to have an unsympathetic guard insist he keep moving. It’s happened to him twice, he tells me, when he’s been on the road and it’s so dangerous that he can’t see and the only thing he can do is white-knuckle the wheel and makes all sorts of promises to himself and to God if only he survives. You know that feeling? he asks me.

Just that morning, after the latest test results arrived in my inbox—the doctor can’t reach me here but the tests can—I’d sunk into a heap on the chair in the corner of my hotel room. The doom in my stomach rose to my throat, and I swallowed hard, trying to breathe. By the time we met up later in the day, I had decided I wasn’t going to tell him, but then I did, a little, enough. His eyes met mine for about five seconds too long. Those eyes. I’m here. You’re here. I’m still here.

Sometimes it’s hard to reconcile this man of mine with the boy who was so shy as a child that he couldn’t look anyone in the eye. At his first soccer game, when he was five, he sat on the sidelines and cried because he was too afraid. For so long, he clung to me like a shadow. But now, here he is, leading me all over this city, ordering my tea, hailing cabs, rifling through my wallet for the right bills, shooing off hagglers, translating for his host family. When we cross the street, I tuck into his side, watching not the traffic but his feet. When he moves, I move.

But I’m always a step behind these days, anxiety saddled to my waist, weighing me down as I try to keep up. At home, in the old life, I am the professor. Here I am the student. More than that, here I am Um Aidan. We’re climbing the steep road near his house as the sun sets in a pink splendor over the sandstone buildings dotting the hill. He’s telling me about Naji al-Ali’s Handala and the men who run coffee out to your car on silver trays and the dried miramia leaves his host mother will crumble into my tea, promising to cure me of any ails. Keep going, I want to say, my voice cracking with love and pride as he strides ahead with a confidence I’ve never had. My boy. Keep going and do not look back. 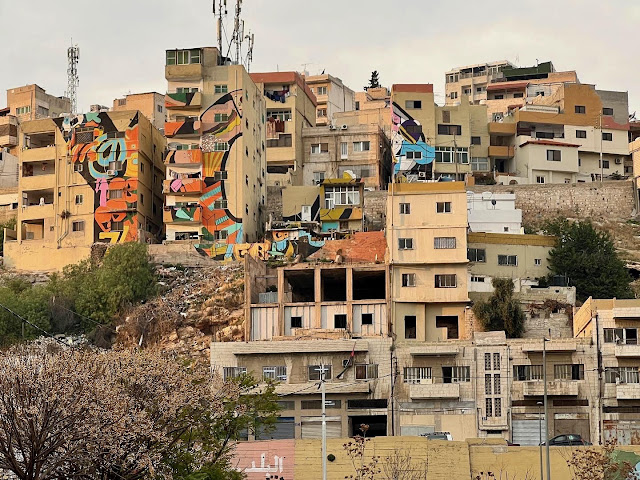 Jenny Spinner is a professor of English at Saint Joseph’s University in Philadelphia where she teaches creative nonfiction and journalism. She received her MA and PhD in English from the University of Connecticut and her MFA in Nonfiction Writing from Penn State University. She is the author of Of Women and the Essay: An Anthology from 1600 to 2000 (U of Georgia P, 2018).

Posted by Will Slattery at 4:30 AM