Imagine if you could touch, taste, build, and run with your arms. Sounds like the next powers of a sci-fi alien. But, there are real creatures on this planet with such capabilities and, thanks to Sy Montgomery’s essay “Deep Intellect,” we have the pleasure of getting to know them.

Octopuses. Yes, octopuses, not octopi (apparently octopi was discarded as the plural of octopus because of its Latin ending on a Greek word). The eight-armed ocean obscurity is pulled from deep waters and brought to the surface in this moving essay on octopus intelligence.

Because of their invertebrate status and their blob-like form, octopuses have never been thought of as intelligent creatures. Categorized as mollusks (and not many mollusks have actual brains), they’ve been misunderstood, perhaps even stereotyped (thanks to Disney’s The Little Mermaid), and generally ignored by America (sorry octopuses, Sea World prefers dolphins). The only place I’ve ever seen an adorable octopus toy you’d want to cuddle with was in Japan (more on that later).

What’s amazing is that octopuses actually do cuddle and play and use tools and strategize. They can also change color, shape-shift, and squirt ink. “Researchers who study octopuses are convinced that these boneless, alien animals—creatures whose ancestors diverged from the lineage that would lead to ours roughly 500 to 700 million years ago—have developed intelligence, emotions, and individual personalities,” writes Montgomery.

When Sy Montgomery traveled to the New England Aquarium in New Hampshire, she was bubbling with excitement at the prospect of meeting Athena, “the aquarium’s forty-pound, five-foot-long, two-and-a-half-year-old giant Pacific octopus.”

Standing above the tank, she dipped her hand into the water in the hopes of getting to touch Athena, “if she consented.” Octopuses in aquariums can distinguish between a familiar human and a stranger, and the way they approach a new person says as much about that person as it does about the personality of the octopus. Montgomery was one of the lucky ones (as octopuses have been known to take an occasional disliking to someone, and, mind you, they do have sharp beaks, teeth, and flesh-dissolving venom. Oh yeah, and their suckers can tear flesh).

“Athena’s suckers felt like an alien’s kiss—at once a probe and a caress,” writes Montgomery. “When I stroked her soft head with my fingertips, she changed color beneath my touch, her ruby-flecked skin going white and smooth. This, I learned is the sign of a relaxed octopus…I was honored that she appeared comfortable with me.”

The lyricism that Montgomery slips into when she writes about her contact with Athena is a testament to her respect and admiration for octopuses, and for this octopus, in particular.

When I lived in Japan, I encountered a similar adulation not only for octopuses, but also for squids, sea urchins, eels, clams, abalone and just about every sea creature known to humankind. Life from the sea has nourished and inspired the people of this island nation for thousands of years.

My first encounter with an octopus was when I bit into a fried battered ball doused in a sweet and salty sauce and found something chewy in the middle.

“Tako means octopus in Japanese” said my friend Masako. “This is takoyaki,” and she served me another fried ball before I had finished chewing the remnants of my first one. It was strange, but not unpleasant—thrilling, and a little scary, ultimately quite oishii (delicious).

I imagine Montgomery had similar feelings upon her tactile encounter with Athena (maybe minus the deliciousness).  But what Montgomery did know at the time (that I did not know when I ate takoyaki) is how intelligent octopuses are. “Octopuses have the largest brains of any invertebrate,” she writes. But the strangest part about this fact is that out of the 130 million neurons in its brain (humans have 100 billion) three-fifths of an octopus’s neurons are not in the brain at all, but in the arms.

“For example, researchers who cut off an octopus’s arm (which the octopus can regrow) discovered that not only does the arm crawl away on its own, but if the arm meets a food item, it seizes it—and tries to pass it to where the mouth would be if the arm were still connected to its body.”

And who said brain size or neuron count is a measure of intelligence? What about neuron placement? What about a decentralized mind? Octopuses can experience sensations humans can only dream of or write about in science fiction.

“We think of our world as the “real” one, but Athena’s is realer: after all, most of the world is ocean, and most animals live there. Regardless of whether they live on land or water, more than 95 percent of all animals are invertebrates, like Athena,” asserts Montgomery.

Who knows what other gelatinous beings are roaming around the planet, thinking and feeling and creating? The mysterious ways that octopuses navigate the world make me question what it means to really know something. 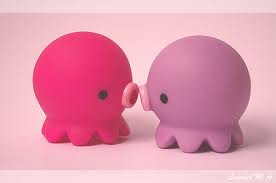 Posted by Brenna Fitzgerald at 8:14 AM