The worms are not eating my garbage. The book says that they would—the title is, in fact, Worms Eat My Garbage. Not all garbage, of course; just food scraps and coffee grounds. I’d bought my worms from Linda’s Vermillion Wormery; found Linda in the shade of a warm Sunday farmers’ market and asked, “What about worms?” 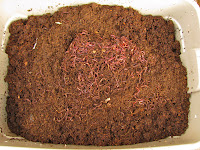 It’s called vermiculture, the culturing of worms, vermicomposting when these worms convert organic waste into the dark soil of humus. Worms eat discarded food—up to four times their body weight in a day—and make waste that is full of nutrients and microorganisms and all the good things that make gardens grow. The point of composting food scraps is to turn them into soil instead of mummified artifacts in our landfills, stuck among our dead toasters and discarded shoes. It is simple if-then logic: If food scraps make up nearly a fifth of what we dump into landfills, if food has the highest rate of methane yield of anything we throw away, and if methane contributes to climate change, then I bought worms.

Linda Leigh sells me two and a half pounds of red wigglers—a breed with a hearty appetite and zest for reproduction—packaged in a gingham bag tied with twine. “What I do is cut up my food scraps and then freeze them and then feed them to the worms,” Linda tells me, handing me a two-by-three plastic bin, and even as she tells me—as I nod and exclaim, “Great idea!”—I know that I won’t. Chopping and freezing food scraps? For worms? I barely have time to chop and freeze my own food, thank you very much.

But when I pour a wriggling mass of worms into a soil-filled bin, as they uncurl and relax from a knotted fist into a writhing expanse, aiding by my prodding fingers—so shiny, so squirming, so other-worldly—and as they ease and furrow and burrow into the dark, damp soil, flicking their posteriors in a curly goodbye, they endear themselves to me. They are my worms and I have brought them into my home. 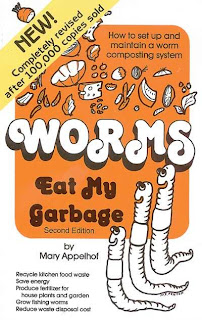 My purchase of two and a half pounds of worm comes with a cartoon-covered book called Worms Eat My Garbage: How to set up and maintain a worm composting system. A parade of cheese rings, egg shells, lettuce leaves, and carrot tops marches towards three upright worms, smiling big wormy smiles. “Worms don’t make noise and they require very little care,” writes Mary Appelhof in Worms Eat My Garbage. “In deciding where to put your worm bin, consider both the worms’ needs and your own.” What are the worms’ needs? Temperatures between 59 and 77 degrees Fahrenheit. Moisture—enough so they’re slimy, not so much that they drown—ventilation and slight acidity, a pH level around 5 or 6. What are my needs? Something between a garbage disposal and a pet.

My worms spend their first few nights in my home in a closet with the light on. Linda had said the light would help them burrow into the soil rather than venture onto my tile and this seems like a sensible use of electricity. Of course, worms can’t actually see—their anterior parts (as opposed to the posterior, the limited anatomical options available to a worm) are simply sensitive to light, leading them to furrow into the darkness of soil or a bruised banana peel.

In a dream, I wake up to find them spread over Saltillo tile like spilled water, like Ghostbusters slime, and they wind, delighted, around my toes.

I move the worm bin outside. It had been the plan all along, at least until triple-digit summer temperatures force them back into the closet. I begin feeding them radish tops and onion peels and citrus rinds, stirring the scraps in by hand, unsettled and unaccustomed to moving worms around, worried that I might pull them apart as I shift heavy soil.

“The effectiveness of your vermicomposting system will depend partly upon your expectations and partly upon your behavior,” writes Applehof. My behavior is erratic, forgetful and then rushed. There is a reason so many writers have cats, animals so stubbornly low-maintenance they seem to insist: I don’t need you.

If I leave my worm bin untended for six months—an option presented to me by Applehof—worms will eat all the bedding and organic waste, producing a bin full of vermicast, “completely worm worked and re-worked material with a fine, smooth texture.” Which means great for soil but bad for the worms—without food discards to eat, the worms die; their little worm carcasses will soon become castings and then rich humus as microorganisms digest their slimy spirals into soil.

And then it snows—in Tucson!—and I panic, mid-day, remembering the worms in their bin outside, convinced I will arrive home to a heavy, decomposing knot of dead worms. Frozen worms. I'm sorry, worms, I think, when I get home and lug the bin back to the closet. And then I wonder if they care. They might be cold, but they might not know it—they might just die before they realize the air has frozen and they are still outside.

In “Consider the Lobster,” an essay published in Gourmet in 2004, David Foster Wallace uses worms as the counterpoint example that proves that lobsters have preferences and thus, that they feel pain. If a lobster claws the edge of its container as its tipped into a boiling kettle of water, if it clings to the edge and clatters when a lid is placed atop, it is reasonable to assume it is expressing a preference not to be boiled. “It may well be that an ability to form preferences is the decisive criterion for real suffering,” writes Wallace. “If you cut certain kinds of worms in half, the halves will often keep crawling around and going about their vermiform business as if nothing had happened. When we assert, based on their post-op behavior, that these worms appear not to be suffering, what we’re really saying is that there’s no sign that the worms know anything bad has happened or would prefer.”

Worms have sex. Of course this does not answer the question as to whether they prefer to have sex or not—whether they preferred that I not leave them in the snow—but even though a single earthworm has both male and female reproductive organs, it takes two to, well, do the wiggle. “Attracted by glandular secretions, they find each other and lie with their heads in opposite directions, their bodies closely joined,” writes Appelhof. Their clitella—the swollen band about a third the way down a worm, the presence of which signifies a worm is sexually mature—secrete mucus and pass sperm from one to another. Both worms form cocoons on the clitella—both cocoons receive eggs and sperm; both cocoons produce baby worms.

Worm sex doesn’t really have anything much to do with composting or climate change, but I think it does with preference and whether or not my worms are a pet or a garbage disposal or something in between. It also doesn’t have so much to do with lobsters or the considering thereof, except that when I read “Consider the Lobster,” I considered a lobster differently than I had before. At the Maine Lobster Festival, where is incidentally where his wonderful essay unfolds, mostly in a tent where 80,000 eat 25,000 pounds over lobster over five days in August, Wallace writes of how lobsters exhibit preferences—to be alone, to be at the bottom, of sea or tank, to be away from light. “In any event,” Wallace writes, “at the Festival, standing by the bubbling tanks outside the World’s Largest Lobster Cooker, watching the fresh-caught lobsters pile over one another, wave their hobbled claws impotently, huddle in the rear corners, or scrabble frantically back from the glass as you approach, it is difficult not to sense that they’re unhappy, or frightened, even if it’s some rudimentary version of these feelings …and, again, why does rudimentariness even enter into it? Why is a primitive, inarticulate form of suffering less urgent or uncomfortable for the person who’s helping to inflict it by paying for the food it results in? …The truth is that if you, the Festival attendee, permit yourself to think that lobsters can suffer and would rather not, the MLF can begin to take on aspects of something like a Roman circus or medieval torture-fest.”

A week or two after my worms nearly froze, after they have returned outside when the weather thaws, after I started offering food again, a little bit at a time, and nicely chopped, after all of it, I went out for tacos with friends. On special at our favorite taco joint: worm tacos. Corn tortillas and sautéed onions and crunchy worms. I was not one of the brave few who paid for the worm tacos—too close to home—but when they arrived, spilling out of the splayed tortilla, and I saw that they were not earthworms—too short, looking more like fat rice than squirmy noodles—I tried one. It crunched, crustaceous, a small explosion of flavor.

After I re-read “Consider the Lobster” and after I crunched on a small silkworm, I walked outside, took a deep breath, and stuck my hand deep into the bin of earthworms and turned over soil. They curl around my fingers, roll and roil, flick and burrow. They wind around each other, curl into the concavity of an orange rind, cluster towards the tail of a radish. There might be a few dead worms after the unexpected freeze, but other organisms will take care of them, just as the worms will take care of us—“A certain convocation of politic worms are e’en at him,” wrote Shakespeare. “Your worm is your only emperor for diet.”


Megan Kimble is finishing up her MFA in Creative Writing nonfiction at the University of Arizona. She writes about food and the environment.
Posted by Megan Kimble at 10:01 AM