The #Midwessay: Travis Scholl, A Reckoning in Missouri

A Reckoning in Missouri
Travis Scholl
*
Editor's note: this essay is graphic in its depiction of a lynching.
*
On Tuesday, January 13, 1931, if you would have opened a copy of The New York Times, you would have turned to page three to read the news that carried the headline BURNS NEGRO KILLER ON VICTIM’S SCHOOL. It narrated the account of the lynching of Raymond Gunn in Maryville, Missouri, some 1,250 miles due west from New York City, 100 miles north of Kansas City. The event gained national headlines mainly for two reasons. One, it occurred well north of the boundaries of the American South, which had gained the title “the lynch belt.” Two, the county sheriff, for dubious reasons, did not deploy the National Guard troops that had been activated specifically to protect Raymond Gunn as he awaited trial.
In hindsight, the event is even more striking for the fact that the lynch mob was willing to burn down their own schoolhouse if it meant they could torture and kill the Black man who confessed to killing the white female, Velma Colter, on the premises where she taught.
Next to the article on page three of the Tuesday, January 13, 1931 edition of The New York Times sits an ad for Vitalis hair tonic. 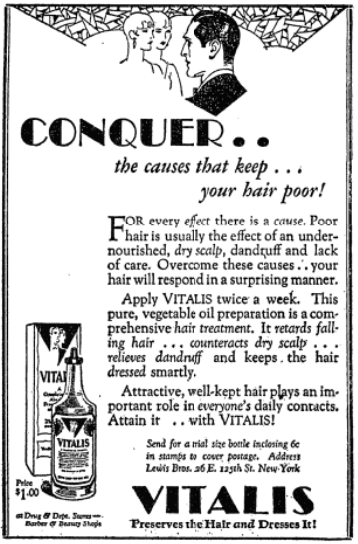 “For every effect there is a cause.” In case you’re wondering, to this day, the Vitalis V7 formula—CAUTION: contents flammable—has remained virtually unchanged.
“For every effect there is a cause.” Raymond Gunn was dragged a mile outside of Maryville, Missouri, to the Garrett schoolhouse. Shingles were removed from the roof so that men could tie his living, breathing body to the ridge beam and doused with gasoline, lethal tonic. Then, at least two thousand people watched as they burned the whole thing down.
“For every effect there is a cause.” If the Middle West we call Missouri can exist as an essay, its cause is the geography of a nation’s most fraught compromise, the way south and north bleed into each other’s boundaries. We have just begun to reckon with how many of our national monuments were built upon the backs of the slaves whose labor made them possible. But these kinds of monuments—slabs of marble, sculpted glass, bronze domes—were not built in this Middle West. Where the Garrett schoolhouse once stood, today you will find only a field beside a country road. No marker. Beneath the tilled surface, the earth has long mixed with the ashes of one body and the blood of another, neither of whom received their due justice.
This essay is excerpted from Travis Scholl’s current work-in-progress, “Of the Burning," which was named a finalist for the 2020 Gournay Prize in the 21st Century Essays series (Ohio State Univ. Press). Born and raised in St. Louis, he is a PhD graduate of the creative writing program of the University of Missouri-Columbia. He works at Concordia Seminary, St. Louis, where he teaches (among other things) writing and edits the Concordia Journal.

What is the #Midwessay? What is the Midwest? What are the characteristics, if any, of the #Midwessay (the Midwest essay)? What gathers us together? What pulls us apart? Springing from a twitter conversation, we started asking writers and readers what they imagine (or would like to reimagine) as the Midwest and the Midwessay. The #Midwessay is a series of reports from the Midwest (whatever that is) by and/or about Midwestern essay and essayists (whatever those are). Essay Daily will be publishing these, sorted (loosely) by state, in February 2021 and beyond.  These #Midwessays will be collected here and on a separate site at a later date. If you'd like to submit a report / essay, send it our way. Details and coordinators for each state are listed here. You can also ping Ander (link at the upper right) if we don't list a coordinator yet for your state. —The Editors
Posted by Ander at 5:00 AM