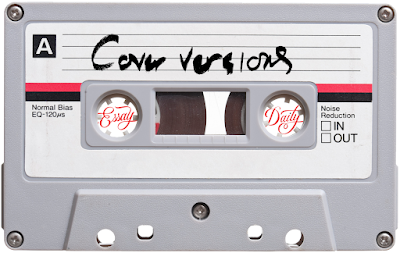 We had so many great cover essays for this year's Advent Calendar that we decided to make it a regular (if occasional) feature. So expect more cover essays in 2022 and beyond. And if you've got a cover essay or an idea for a cover essay, pitch us (email Will or Ander, or ping us on twitter). —Editors

In the eighties I played in a band. I was the only girl. I was frequently troubled by the Reagan presidency, the looming threat of nuclear annihilation and, as Prince put it, “a big disease with a little name.”

When Reagan denounced Russia on a hot mic and said “we begin bombing in five minutes,” I became afraid to sleep alone.

I attended gigs by local bands, out-of-town bands, and national touring bands. I sometimes camped out to buy tickets. Staying up all night was not a problem for me.

I went to school—The University of Arizona—much of the time.

Personal relationships were more important to me than anything else.

I was enthralled by an older woman. She was 21 and married to an even older man. We drank vodka and lay on the floor of her living room in the dark and listened to David Bowie sing “Cat People.” Instead of putting out fire with gasoline, we sang Vaseline, and rolled over laughing. I don’t remember the first time we kissed, I only remember the feeling of wanting to.

With three other students I lived in a rented bungalow south of campus. One roommate kept a St. Bernard and sold drugs. The St. Bernard bit me in the back, and its owner said he would euthanize it. He moved out so I never knew if he really did.

Inside the Controversy album was a poster of Prince standing in the shower wearing only a g-string and a gold chain around his hips. I hung the poster in my bathroom. When he played in Phoenix, I rode to the concert with a friend in the back seat of another friend's car, mixing gin and tonics. The friend drove eighty-five miles an hour and drafted behind a semi so closely the trucker couldn’t see our car. We had a little cutting board in back for the limes.

My band practiced in a dusty garage and listened to Joy Division, the Gun Club, and the Fall. We wore secondhand paisley shirts and penny loafers with no socks. I took Black Beauties every day for a week, then slept for two days after that.

I had asymmetrical hair.

I walked into a pink stucco house one afternoon and met a woman named Liz. She had just come back from Europe, and for that reason would only drink Heineken. We hiked up Sabino Canyon and cooled the beer cans in the creek. When we moved in together, I hung the Prince poster in the bathroom.

Eventually I got in a different band with different boys and took a semester off to go on tour. I didn’t withdraw from classes, I just stopped going to them. I got F’s in everything except Painting. On the road we listened to the Human Hands, Zoviet France and The Violent Femmes. We slept on the wooden floor of a loft in San Francisco that had been occupied by a man who hanged himself.

Ian Curtis had also hanged himself and I thought, somehow, the two suicides were connected.

I protested the escalation of the Cold War. I marched to Take Back the Night. I thought Mondale could win.

I heard the Smiths for the first time in a dorm room at UC San Diego, where my band played to ten people at the Ché Café. When I came home from touring, Liz told me she hadn’t slept with our mutual friend yet, but she wanted to. I moved out one afternoon while she was at work.

I got a job at the daily newspaper and was fired two weeks later for being “too artistic.”

I used to think that someday I would write a film version of my stupid life in the eighties.

I dropped LSD for the first time with a customer from the coffeehouse. Somebody said the guy had so many library fines that the University wouldn’t grant him his diploma. So he just bought one cup of coffee and sat in the corner all day and tried to make friends with the lesbians.

On the day we took acid, we rode the elevator to the top of the Science building and found an open door to the roof. There was a monsoon sky and I saw God in the clouds. God was Aretha Franklin and she had two backup singers. Somewhere I read that when they made the video for “Sisters Are Doin’ It for Themselves,” Aretha wouldn’t talk to Annie Lennox because she thought she was gay.

I hated that song.

I had a coworker, Patrick, who was an astonishingly attractive man from New England. He had slate blue eyes and a patrician jawline, and the cultivated stubble of a Ralph Lauren ad. If he told you to go fuck yourself, you’d think he paid you a compliment. When I had to open the shop in the mornings, he’d get there early and do all the work and meet me at the door with a cup of tea. We’d listen to Kate Bush in the calm early light and wait for the morning rush. When Kate sang “Wuthering Heights,” a customer would invariably come to the counter to inform us the record was on the wrong speed. I loved watching Patrick tell them it was supposed to sound like that, then roll his eyes at me as the philistine walked away.

After he got sick, Patrick moved back to Boston and wrote me type-written postcards. When I got the news he had died, I was lying in bed waiting for a pizza delivery. The eighties ended that night.

Cheryl Graham lives in Iowa City. She writes about music for PopMatters, and has been published in the New York Times, Sierra Magazine, Pigeon Pages, and the March Xness series.